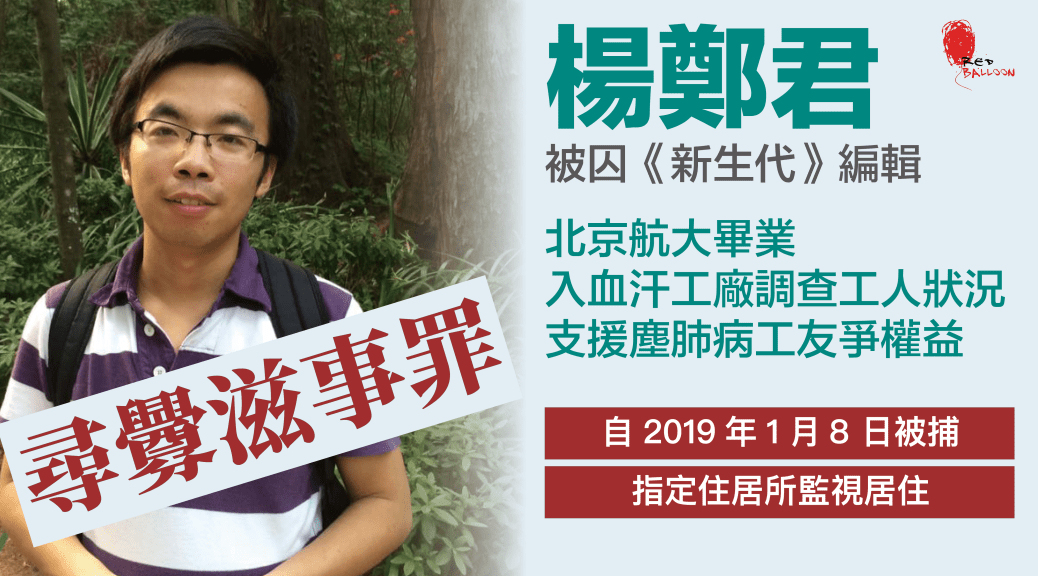 Mr Yang Zhengjun, nickname ‘Baozi’ on the internet, was born in 1986 in Chongqing, China. He is a defender of labour rights in China, and one of the three editors of Xinshengdai (iLabour.net, an independent media platform dedicated to labour rights) who were arrested in early 2019.

Mr Yang has long been concerned about silicosis workers from Hunan Province. He has been continuously posting news on the Internet about the rights-defending (weiquan) movements of the workers. Yang also offers consulting services including labour laws and regulations and petitioning (shangfang) for the workers. On January 8, 2019, Yang Zhengjun was arrested by Pingshan police of Shenzhen in Guangzhou. Yang’s family received a notice of criminal detention on January 10 and learned Yang was accused of ‘picking quarrels and provoking trouble’ and was detained at Shenzhen Second Detention Centre. On February 6, Yang was transferred to a place for ‘designated residential surveillance’, an unknown location in Dapeng area, Shenzhen. After that, he was sent back to Shenzhen Second Detention Centre, and later placed under designated residential surveillance again. During the period, Yang was denied the right to legal counsel. Yang has been detained for more than three months, but his family and attorney have not seen him since then. They have no idea Yang’s whereabouts, if he has been tortured and if is he safe or not. The situation is worrying.

Mr Yang holds a bachelor’s degree from The School of Biological Science and Medical Engineering of Beihang University, Beijing and a master’s degree of political economy from The Minzu University of China, Beijing. During his college years, he joined a nationwide activity in which college students went to the countryside to support farmers and conduct research. This experience affected his quest for the well-being of the workers and farmers and making changes upon facing social injustice.

Yang initiated his very first action for workers rights in 2008. In the first year of his graduate studies, he established and organised ‘Coke Concerned Student Group’, with which he investigated the labour situations of the bottling factories and suppliers in China under the multinational corporation Coca-cola and published a report based on the investigations. The report revealed how Coca-cola’s exploitative use of the contract workers, and requested the company to conform to the requirements of the Labour Contract Law and improve the treatment of the working conditions of the contract workers. Coca-cola responded to the report and the All-China Federation of Trade Unions also expressed grave concern. The research conducted by Yang and ‘Coke Concerned Student Group’ was the first action in China which focused on the contract workers and requested the implementation of Labour Contract Law.

After two years, in 2010, a total of thirteen workers committed suicides at Foxconn Shenzhen, the biggest supplier of Apple, shocked the world. Yang was furious about the incidents and convened a group of college students who cared about labour rights. They went to Shenzhen to investigate the working situations of the workers in Foxconn. He also called for people who were concerned about the incident and the situation to ‘take a stroll’ at Zhongguancun as a way of mourning.

After Yang graduated from his master’s programme, he has started to take part in the operation of a labour rights ‘self-media’ named ‘Xinshengdai’. He continually followed the issues concerning the rights of workers and spoke out for the workers in different sectors. Eventually, in January 2019, Yang was arrested for the Labour Law and ‘Petitioning (shangfang) Regulation’ assistance he provided to the workers and help posting the news about Silicosis workers from Hunan Province. Yang who was arrested in Guangzhou by Pingshan police of Shenzhen who crossed the city’s border for the arrest. He was detained for ‘picking quarrels and provoking trouble’ and has not been released to date.