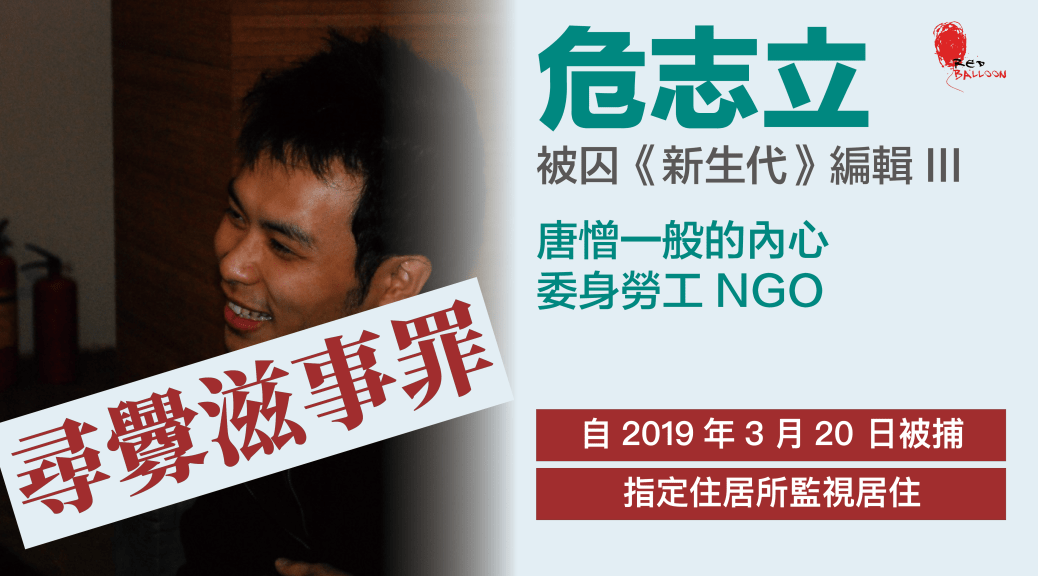 Mr Wei Zhili, born in 1988, from Guangzhou, is a senior Chinese labour rights defender and the husband of Zheng Churan (also known as ‘Da Tu’), a famous feminist activist in China. Mr Wei was also one of the three editors of Xinshengdai (ILabour.net) who were arrested in early 2019. He was arrested on March 20, 2019 for helping Silicosis Workers from Hunan Province to seek compensation. He was taken away by Pingshan police of Shenzhen in a rented house in Guangzhou, and detained at the Shenzhen Second Detention Center for ‘picking quarrels and provoking trouble’. On April 20, Wei Zhili’s family received a notice and learned that Ke, like the other two Xinshengdai editors, was placed under ‘designated residential surveillance’. Wei was denied the right to legal counsel and to meet with his family.

Mr Wei graduated from the School of Journalism and Communication at Guangzhou University in 2011. He started to follow the workers who struggle for survival at the bottom of society in China since he was in high school. One time when he went for a blood donation during his college years, he read a booklet on the deplorable conditions of Silicosis Workers, and he learned that there are tens of thousands of workers suffering from pneumoconiosis. Those workers contracted the occupational disease due to adverse working conditions and have long been hard pressed by poverty or illness. Filled with indignant for the grass-roots workers, Wei was aspired to devote himself to improve the living conditions of workers in China. He conducted researches on the labour situation and gradually familiarised himself with the situation the local workers faced, which strengthened his determination to serve the labourers.

After graduation, Wei worked at ‘Hand in Hand Workers Center’ (Shou qian shou gong you huo dong shi) in Shenzhen, to serve the workers and community. His sincerity and willingness to take action won the hearts and trust of workers. Wei has solved plenty of problems for the workers. After the Center was forced to gradually close down by the government, Wei became an editor of the ‘self-media’ named ‘Xinshengdai’, in which he discussed and published information on labour rights. After Xinshengdai was shut down in 2016 due to its coverage of the miners’ labour movement in Shuangyashan, Heilongjiang Province, Wei continued his editor career in another ‘self-media’ named ‘Weigonghui’. Weigonghui was forced to close twice. Ke and other editors thus re-used the initial name Xinshengdai when they re-launched the webpage in December 2018.

On March 20, 2019, Wei was taken away by Pingshan Police of Shenzhen from a rented house in Guangzhou for helping several Silicosis workers from Hunan Province to seek compensation, and has been detained for ‘picking quarrels and provoking trouble’ at the Shenzhen Second Detention Centre. Now he is placed under ‘designated residential surveillance’ and has not been released to date.