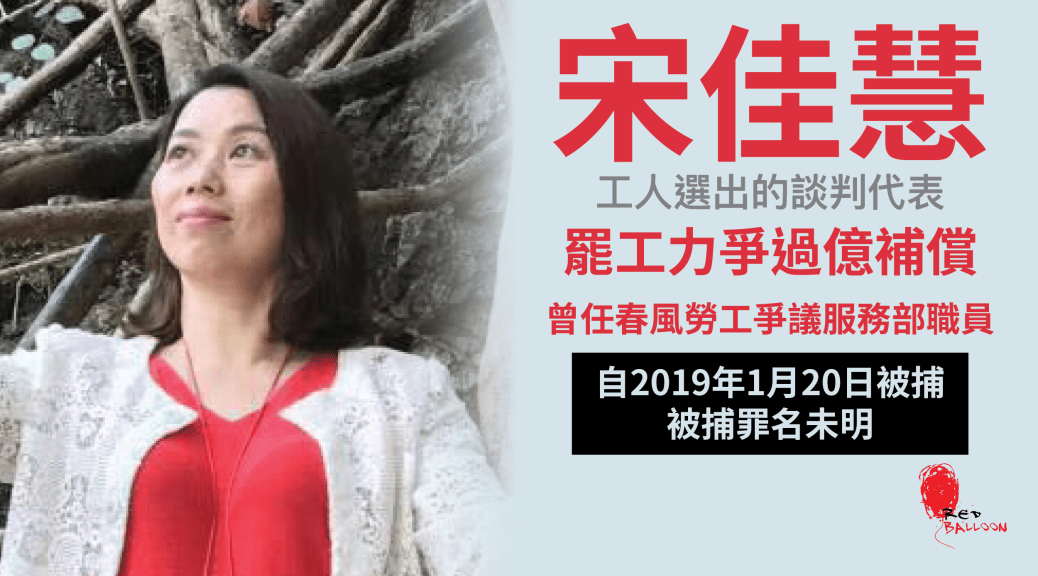 Ms Song Jiahui was arrested on January 20, 2019, the reason is yet unknown. Other labour rights activists including Wu Gui-jun, Zhang Zhi-ru, Jian Hui and He Yuan-cheng were also arrested on that day.

Song is a worker who used to work at Lide shoe factory in Panyu, Guangzhou. She took part in the strike from 2014 to 2015. During the strike, she became one of the nineteenth negotiators elected by the workers.

The Lide shoe factory workers’ strike is a milestone for the collective struggles of workers in China in recent years. It is also a prominent example of labour non-governmental organisation (NGO) assisting workers to strike for rights-defending (weiquan) which succeeded. During the strike, the workers showed great proprieties, democratic temperament in the election of negotiators and patience while negotiating with the employers.

The workers of Lide learned from various sources that the management plotted to relocate the factory. When a plan with no relocation compensation was announced in December 2014, the workers launched a strike right away. After three rounds of negotiations, the company agreed to pay for overtime compensations, annual leave and high-temperature subsidies, etc. Also, the management and the workers agreed on organising the fourth round of collective negotiation in the near future.

However, the company procrastinated to start the fourth negotiation in the following six months, and meanwhile, they gradually moved the production equipment from the factory. In view of the measures taken by the company, the workers re-elected nineteenth negotiators and occupied the factory, demanding the company to commence the negotiations immediately and to clear up arrears including social insurance and housing fund before the relocation of the factory, and to compensate the dismissed employees. Song was elected to represent the workers.

The struggle in Lide shoe factory was never free from troubles, several members from the labour NGO were beaten. On the day that Song was elected, the police disrupted the meeting of workers’ representatives, assaulted the workers and arrested members of labour NGO who were assisting the workers like Meng Hang. But the workers did not yield to the intimidation. They went to support the arrested comrade-in-arms and meanwhile continued striking.

The new representatives of workers started the second round of strike to bring the management to the negotiation table. The employer and employees reached an agreement. In late April 2015, the employer promised to clear up arrears including social insurance and housing fund, and compensate the workers who were not relocating with the factory. The settlement amounted to twelve million yuan. As an elected representative, Song strives in partnership with the workers and achieved victory at last.

However, the successful struggle was followed by ruthless suppressions. On December 3, 2015, the staff of Panyu Workers Service Center including Zeng Feiyang, Zhu Xiaomei and Tang Huanxing who had assisted the workers of Lide shoe factory were arrested for ‘assembling a crowd to disturb social order at public sphere’, and were sentenced to prison terms in September 2016. In January 2019, Ms Song, the representative who led the workers’ strike, was also imprisoned.

Song worked for a time at Chun Feng Workers Service Center to continue her service to the other workers. Now she is detained, the reason for detention is still unknown.