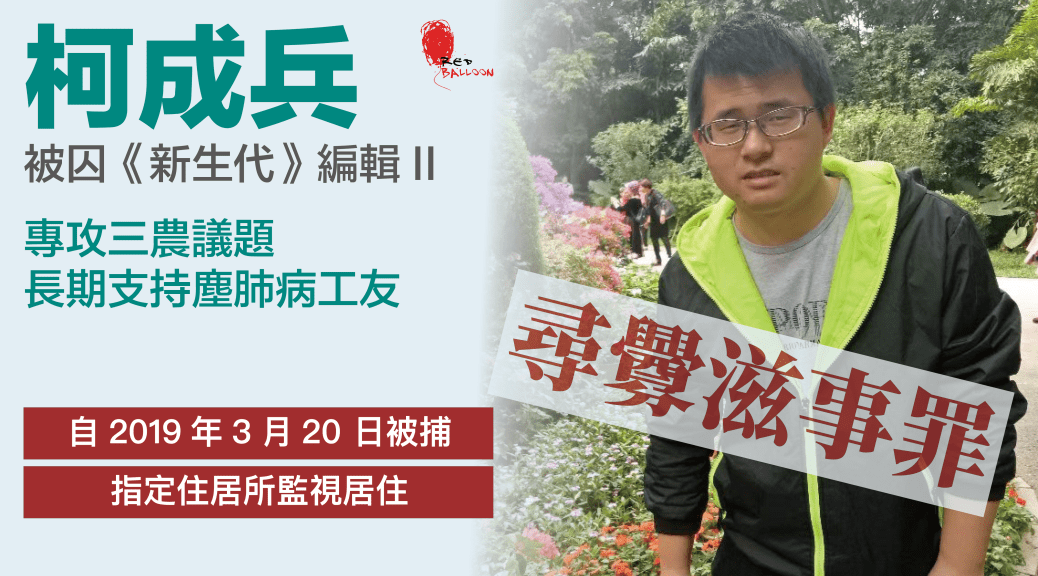 Mr Ke Chengbing, or nickname ‘Laomu’ on the internet, born in Hubei in 1989, is a senior Chinese labour rights defender. He was also one of the three editors of Xinshengdai (ILabour.net) who were arrested in early 2019. He was arrested on March 20, 2019, for helping Silicosis Workers from Hunan Province to seek compensation. On that date he was taken away by Pingshan police of Shenzhen from a rented house in Guangzhou, and has been detained for ‘picking quarrels and provoking trouble’ at the Shenzhen Second Detention Center.

On April 20, Ke Chengbing’s family received a notice and learned that Ke, like the other two Xinshengdai editors, was placed under ‘designated residential surveillance’. ‘Designated residential surveillance’ is a highly controversial form of imprisonment implemented in China since 2013. During the imprisonment, the government can conceal the whereabouts of the detainee, deny his right to legal counsel and to meet with his family members. As there is no camera and supervision, the police possess the supreme power and torture and forced confession occurred frequently. According to a number of human rights lawyers who were placed under ‘designated residential surveillance’ in the past, they have been forcibly deprived of sleep for several days and suffered extreme physical and psychological torture. The situation of the recently detained three editors of Xinshengdai is also very worrying.

Ke Chengbing graduated from Jinan University in 2012. During his college years, he joined students groups which focused on the ‘Three Rural Issues (Sannong)’ and took part in various agricultural experience in the countryside and conducting social researches. Those activities not only enriched his knowledge in the Sannong sector but also enhanced his sensitivity to social issues. Owing to this, Ke was very much loved and trusted by his schoolmates.

After graduation, Ke committed himself to serve the workers from a younger generation in the Pearl River Delta. He participated in the investigations of the working conditions in Foxconn. In 2013, he became a news editor of a ‘self-media’ outlet Xinshengdai, intended to dedicate himself to speaking out for workers. Xinshengdai was forced to close in 2016 due to its coverage of the miners’ labour movement in Shuangyashan, Heilongjiang Province. Ke then set up a new ‘self-media’ named ‘Weigonghui’ in the same year and continued his work to care for the Chinese labour situation. Weigonghui was forced to close twice. Ke and other editors thus re-used the initial name Xinshengdai when they re-launched the webpage in December 2018. Under such difficult circumstances, Ke did not give up and has insisted on speaking out for workers.

On March 20, 2019, Ke was taken away by Pingshan police of Shenzhen in a rented house in Guangzhou for helping several Silicosis Workers from Hunan Province to seek compensation. He was detained at the Shenzhen Second Detention Center for ‘picking quarrels and provoking trouble’, later transferred to a place for ‘designated residential surveillance’ and has not been released to date. In a letter from Ke’s girlfriend Ma Lan to Ke, she wrote, ‘Let us keep each other company in the dark. Walking along, we will see the dawn gradually comes.’