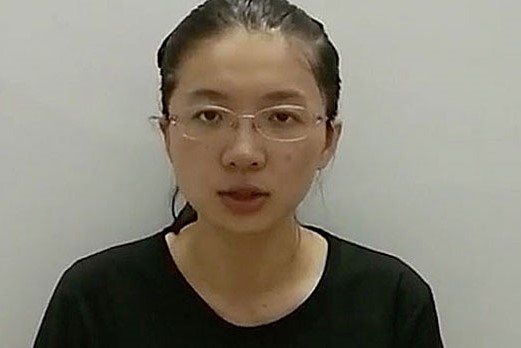 A Maoist activist who supported a campaign to set up an independent workers’ union in the southern Chinese province of Guangdong has been “kidnapped” and is being detained in an unknown location, prompting further protests by labor activists, RFA has learned.

Shen Mengyu, a former employee of the Jasic Technology factory in Guangdong’s Shenzhen city, was taken away by the authorities after she led a campaign for a union to negotiate collectively on behalf of some 1,000 Jasic workers.

Shen was grabbed and forcibly restrained by three unidentified individuals as she ate dinner with her father on Aug. 11, before being bundled into an unmarked vehicle, sources close to the campaign told RFA.

An academic researching the labor movement in China told RFA that nobody knows where Shen was taken. A fellow activist identified only by a nickname Xiao Hu was detained around the same time, and also remains incommunicado, the academic said.

“Around 20 supporters [of Shen and the union campaign] went once again to a square near the Yanziling police station today … and made speeches, explaining to passersby what had happened,” the academic said.

“They were calling for the release [of Shen and other detainees].”

The protesters had steered clear of the police station, for fear of being detained themselves, he said.

“We were beaten up in our own factory by unofficial police thugs,” one protester says on video footage of the protest, as a fellow protester holds up a portrait of late supreme leader Mao Zedong behind him.

“You may say that people get beaten up all the time, and there’s no way to care about all of it,” the man says. “But we have to stand up and speak out like human beings; we can’t allow ourselves to be trampled underfoot like ants.”

An officer who answered the phone at the Yanziling police station on Monday said they didn’t know about the situation, when asked about Shen Mengyu’s whereabouts.

Thirty workers at Shenzhen Jasic Technology were detained last month on suspicion of “picking quarrels and stirring up trouble,” after their cause was supported by a group of Maoists from the far left of China’s political spectrum, led by Shen.

A second anonymous source said 16 of them have since been released, but remain under close surveillance by the authorities.

Many have since made allegations of mistreatment and brutality against police, the source said.

“Sixteen out of the 30 have been released, and 14 are still inside,” the source said. “Hu Kaiqiao went straight back to her hometown on her release, and we haven’t heard anything from her since.”

“Seven other workers have spoken out, saying that they were mistreated or tortured to varying degrees,” the source said. “Since they came out, they are under surveillance and being followed.”

A former detainee and Jasic employee told RFA via social media that conditions in the police station were inhumane, with more than 50 people crammed into a cell of just 30 square meters.

Detainees had to wash in cold water, and were forced into humiliating and stressful postures while being interrogated by police, they said.

Meanwhile, the source said former detainee and Jasic employee Lan Zhiwei was restrained behind his back and beaten, while fellow detainee Huang Lanfeng was struck in the mouth and repeatedly around her head, causing bleeding.

“Another person by the name of Tang Xiangwei also got beaten up in there,” the source said.

Shen and a group of Maoists from the far left of China’s political spectrum applied for jobs at Jasic Technology as part of their bid to help the unionization campaign at the factory, but many of the workers were then targeted for beatings by unidentified men.

According to an open letter penned last month by Shen and fellow activists, Jia Lei, owner of the Jasic factory, and personnel manager Guo Liqun are both delegates to the Shenzhen People’s Congress, a rubber-stamp body entirely controlled by the ruling Chinese Communist Party.

Guo’s husband is also a high-ranking official in the local government.

“We hope that party secretary Tao Yongxin will immediately deal with this matter, urge the police to release the detainees immediately, and severely punish those who beat up the workers, compensate them for their losses, and apologize,” the letter, a copy of which was available on the overseas documentation site HackMD, said.

“The Pingshan government and the regional branch of the All China Federation of Trade Unions (ACFTU) should pay attention to directives from the central government, and encourage these workers to set up a union for the legal protection of their rights, and play a positive and supervisory role in managing the company,” it said.

The detention of workers came on July 27 as they protested the dismissal by factory management of those involved in a bid to set up a union through legal channels.

Seven workers said they had been beaten up by police for their involvement in the campaign to found a union, which began on July 18.

The ruling Chinese Communist Party-backed All-China Federation of Trade Unions (ACFTU) is charged with protecting workers’ rights, but independent labor groups and workers say it has a poor track record when it comes to negotiating with management and government officials.

More than 40 years after his death at the age of 82, late supreme leader Mao Zedong still presents a political dilemma to the ruling Chinese Communist Party.

While revering Mao as the leader who founded the People’s Republic on Oct. 1, 1949, the party has been forced to conclude publicly that the leader made some “serious political mistakes.”

Locally funded statues of Mao have been torn down in recent years, reflecting official concerns over the potential use of the Great Helmsman’s image as a focus for millions of poor and dispossessed people in China, including the country’s army of petitioners, many of whom have lost their land or homes to government-backed development.

Mao’s birthplace at Shaoshan in the central province of Hunan remains a major tourist attraction, drawing massive crowds around the anniversary of his death on Sept. 9.

Those paying homage to the father of communist China include laid-off workers and veterans who fought in the China-Vietnam War in 1979, according to state media.

The administration of President Xi Jinping has shut down a number of Maoist websites in recent years, including Utopia, but has generally allowed them to re-open after politically sensitive events, such as the trial of leftist icon and former Chongqing party chief Bo Xilai in 2013.