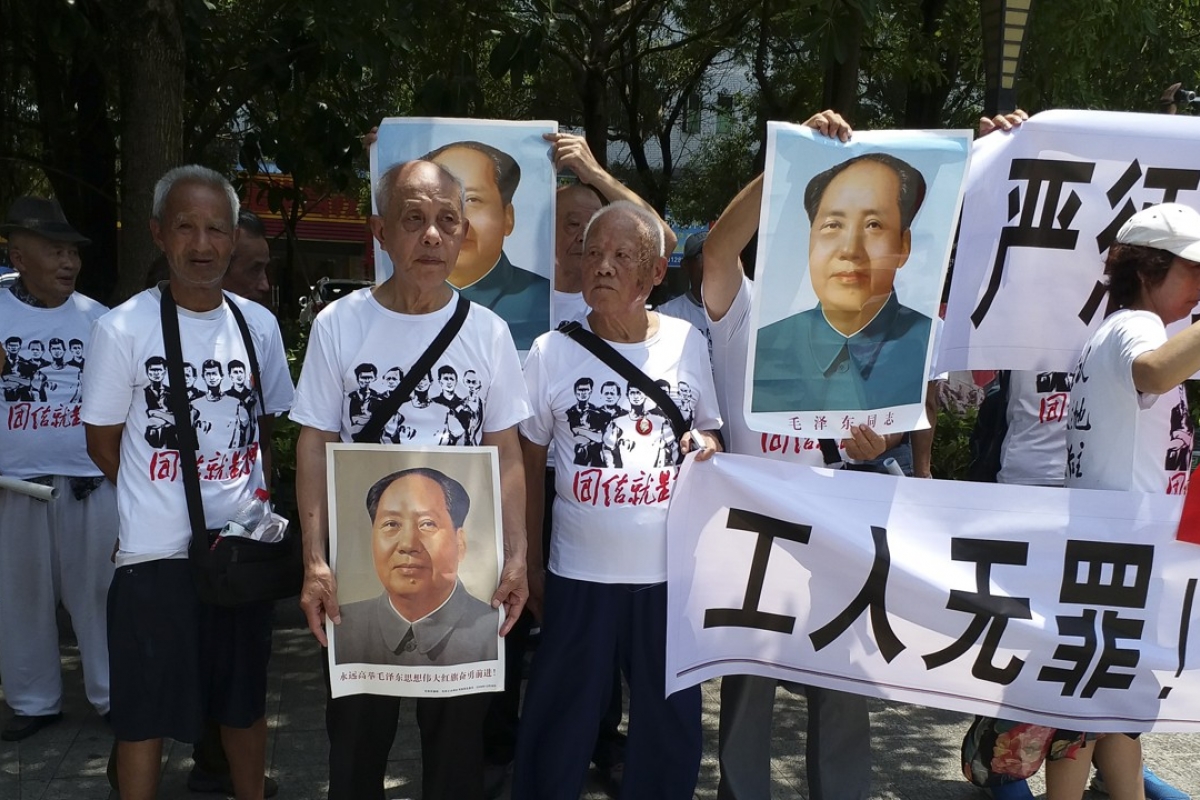 A high-profile intervention of leftist Chinese university students in a labour rights dispute in southern China gained momentum this week when old guards from the country’s leading ultra-left group joined the protest.

The students have been campaigning for workers of stock market-listed Jasic Technology, who are fighting for union rights, through street rallies, demonstrations, fundraising and open letters.

The Shenzhen, Guangdong province, company is a manufacturer of electronic welding machines and robotic arms. Efforts to start a union resulted in a crackdown by factory management and city authorities last month, according to workers.

Seven Jasic worker representatives have been sacked, beaten and detained and 29 of their supporters arrested. They include family members, colleagues and a student.

As of Tuesday night, 14 people – including a nursing mother, Zhang Zeying – were still in detention for allegedly picking quarrels and disrupting order. 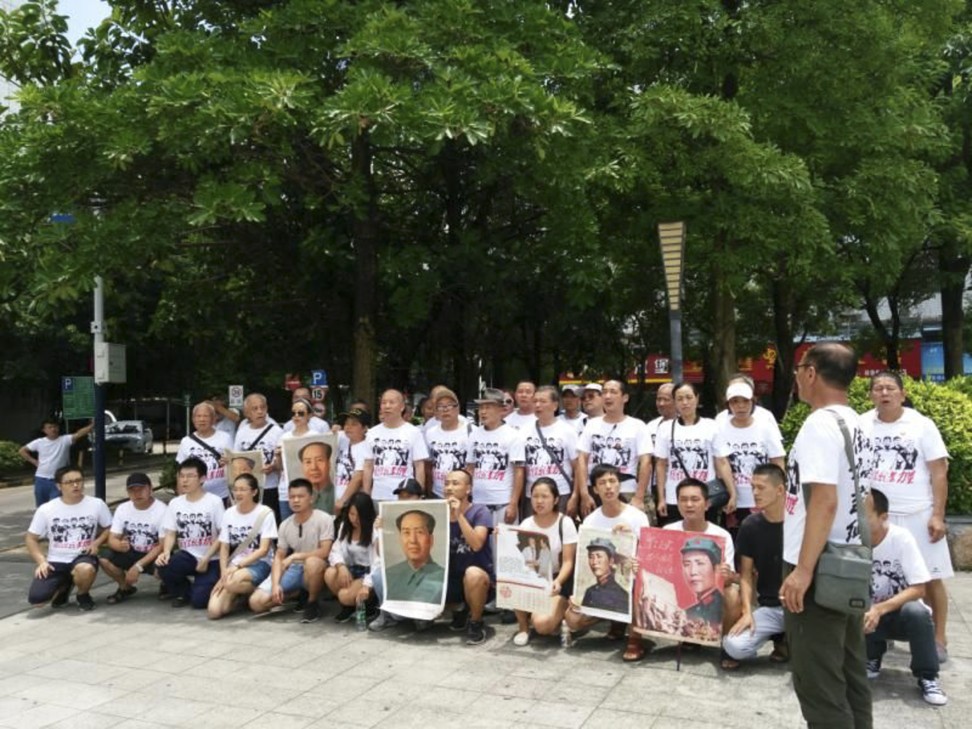 An intervention of Chinese university students in a Shenzhen labour rights dispute gained momentum when old guards from the country’s leading ultra-left group added their weight to the campaign. Photo: Mimi Lau

At noon on Monday, about 80 supporters staged a second rally under the scorching sun outside Yanziling police station in Shenzhen’s Pingshan district, about 50km (31 miles) from the border with Hong Kong. More than 40 Communist Party members and retired cadres, who are part of the country’s leading Maoist internet forum, Utopia, joined the rally.

They demanded the unconditional release of Jasic workers from police custody.

During the hour-long protest, students, workers and retirees formed a human chain and chanted slogans. Workers described how they were physically abused while in detention.

In speeches the student activists demanded the unconditional release of all workers, the right to set up a union, and for police and thugs accused of beating up workers to be punished.

Utopia demonstrators were seen holding posters of China’s former chairman Mao Zedong, which was reminiscent of the socialist rallies held in the country in the 1960s. 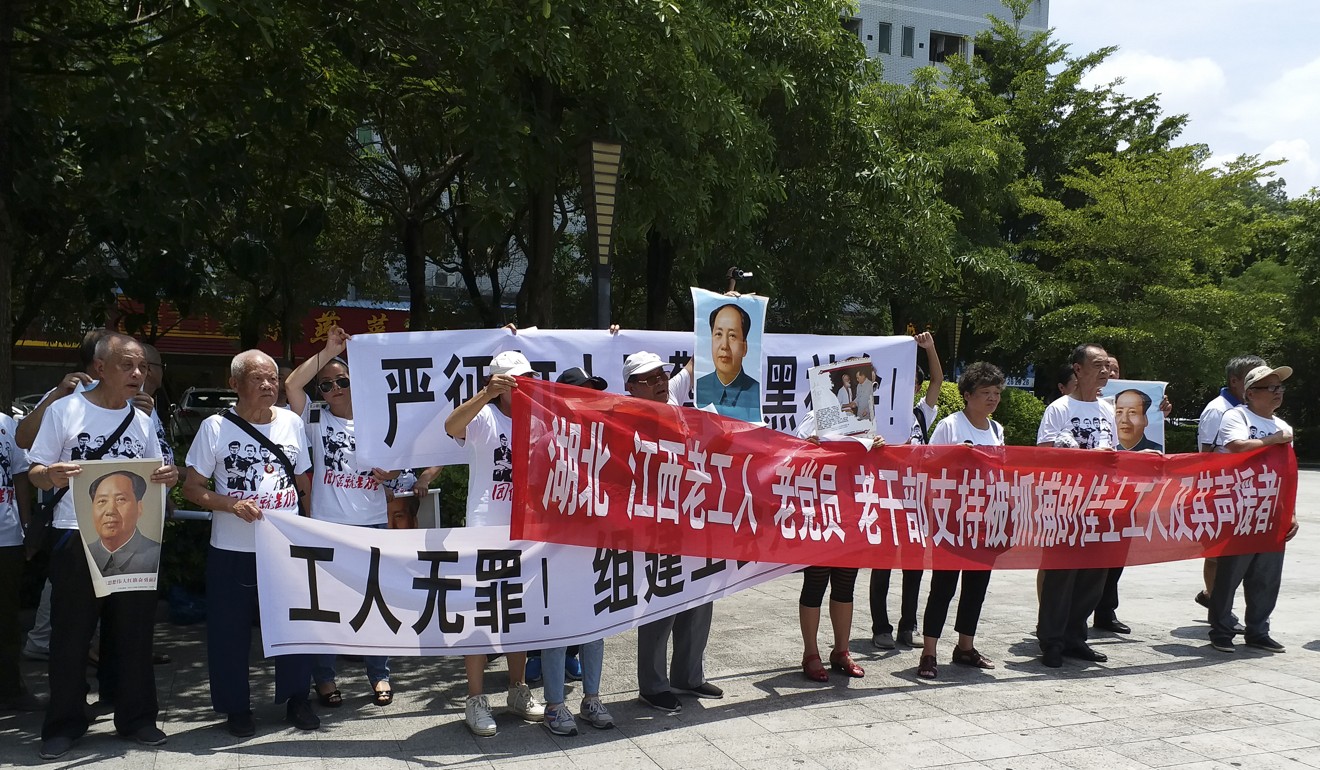 Song Ying, a 67-year-old Maoist from Zhengzhou, capital of central China’s Henan province, said she had no option but to turn up and show support. With the students behind them, she was optimistic about the Jasic workers’ protests.

“This is a great awakening moment of workers. They might be small in number but they do not realise what they have achieved. This is a turning point for Chinese workers’ resistance,” Song said.

According to Shen Mengyu, a Sun Yat-sen University postgraduate who worked in a factory for three years, students had been going to Shenzhen since the end of July to call for the unconditional release of the detained workers. They had done so at their own expense and despite the risks they faced to their personal safety.

“Most of the supporters are university students and share leftists views. Our hearts are tied with the grass-roots workers,” she said.

“We are prepared for what’s to come. There is nothing wrong as long as we operate within the law, our demands are legitimate.” 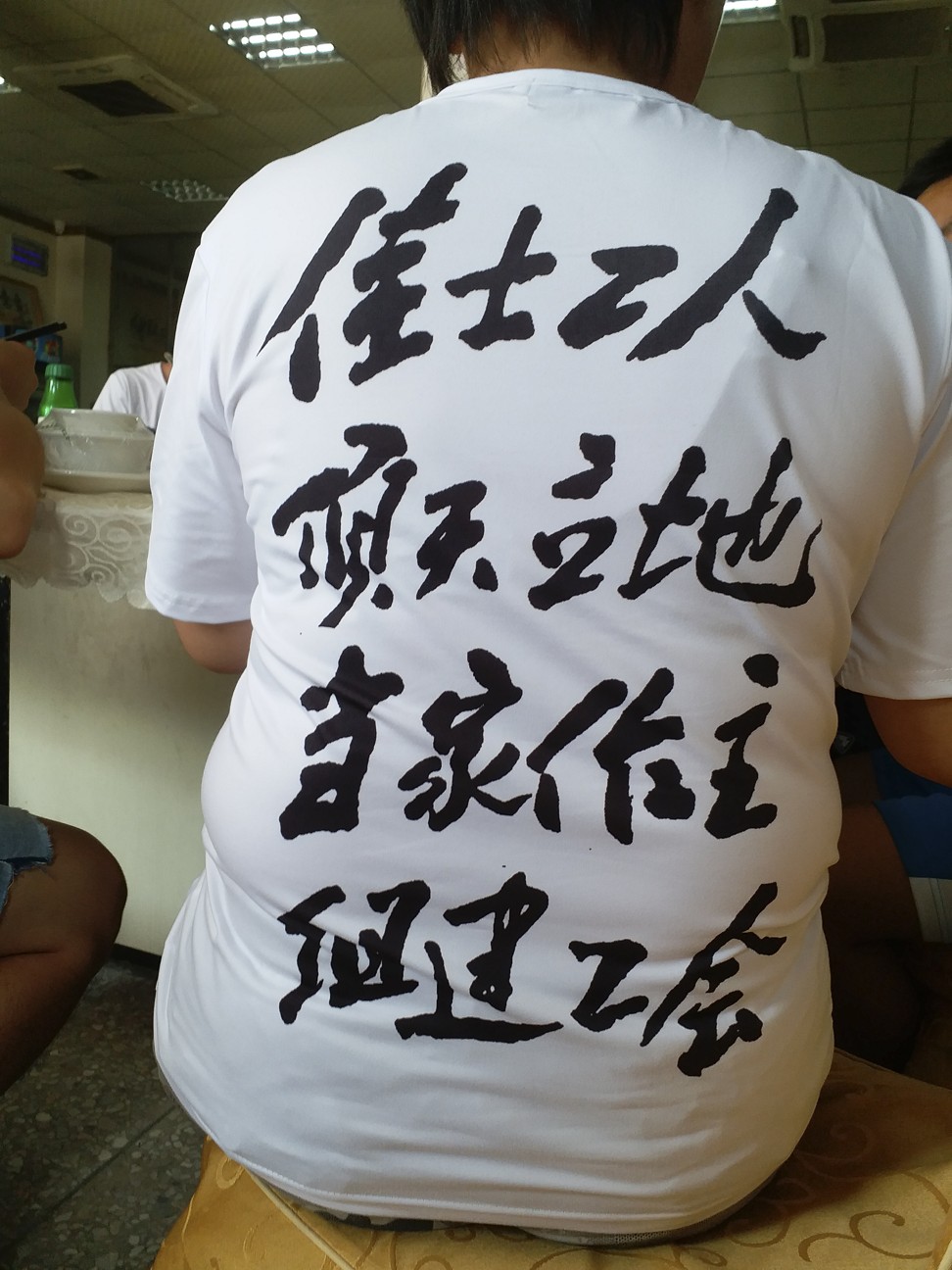 Slogans on the back of a protester’s T-shirt urge Jasic workers to stand “upright” and be their own boss. Photo: Mimi Lau.

Commenting on the latest socialist actions in Pingshan, Chris Chan King-chi, a labour rights expert at Hong Kong’s City University, said there had been a massive crackdown on labour rights since 2015, which had led to a widening of the wealth gap and intensified social conflicts.

The Pingshan campaign for a democratic union was gaining increasing support in society, he said.

“Their actions serve as a wake-up call for more concern for the grass-roots class among intellectuals.”

Chan said that the students’ left-wing views and their ability to mobilise support, put authorities in a difficult position. If they responded with a severe crackdown they risked garnering more support and public sympathy for the protesters.

A 27-year-old worker from central China’s Hunan province who was recently released by Shenzhen police said he was overwhelmed by the support shown to the workers.

“If not for this, I would probably never have come across a Tsinghua or Peking U student in my life,” he said.

“I see hope in the future, that we can become a part of a bigger process of decision making with a union. We will no longer be trampled on like dirt.” 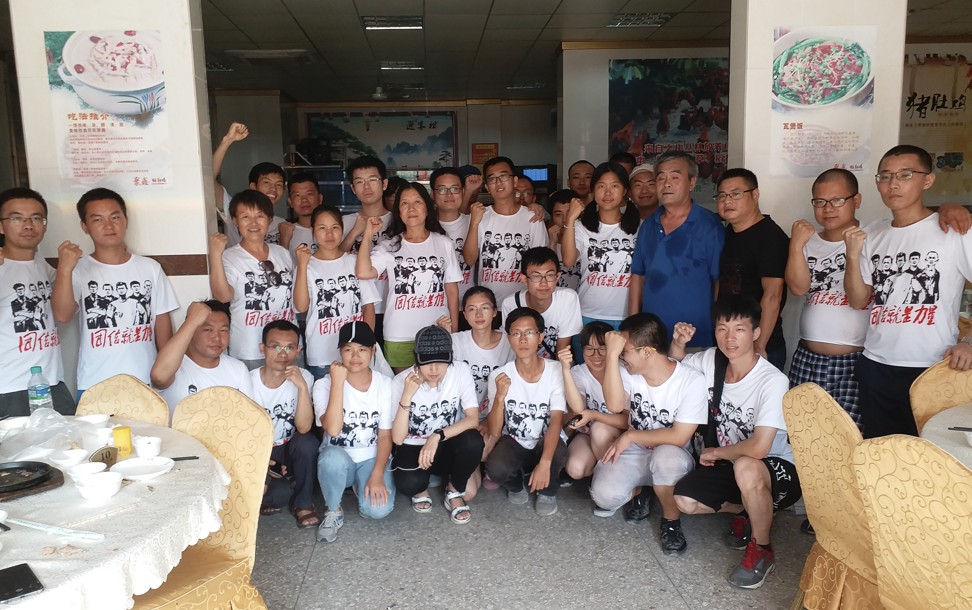 A worker from Hunan who was recently released by Shenzhen police said he was overwhelmed by the astonishing support shown to the grass-roots workers. Photo: Mimi Lau

The government-controlled All China Federation of Trade Unions has encouraged the establishment of trade unions on condition that they toe the Communist Party line.

“Any suspicions that a grass-roots union might have ties with an external party would be met with a crackdown. This has not changed since 2010 when the Pearl River Delta car factories experienced a chain of industrial actions that went nationwide,” Chan said.

Most labour resistance protests in China revolve around wage and pensions disputes. It is rare to see workers focusing solely on their political rights, such as establishing a democratic union.

According to a “strike map” collated by the Hong Kong-based China Labour Bulletin, more than 1,860 strikes or workers’ protests have been recorded over the past 12 months but Jasic was the only action associated with forming a union.

Neither Shenzhen police nor Jasic Technology responded to the Post’s repeated requests for comment.