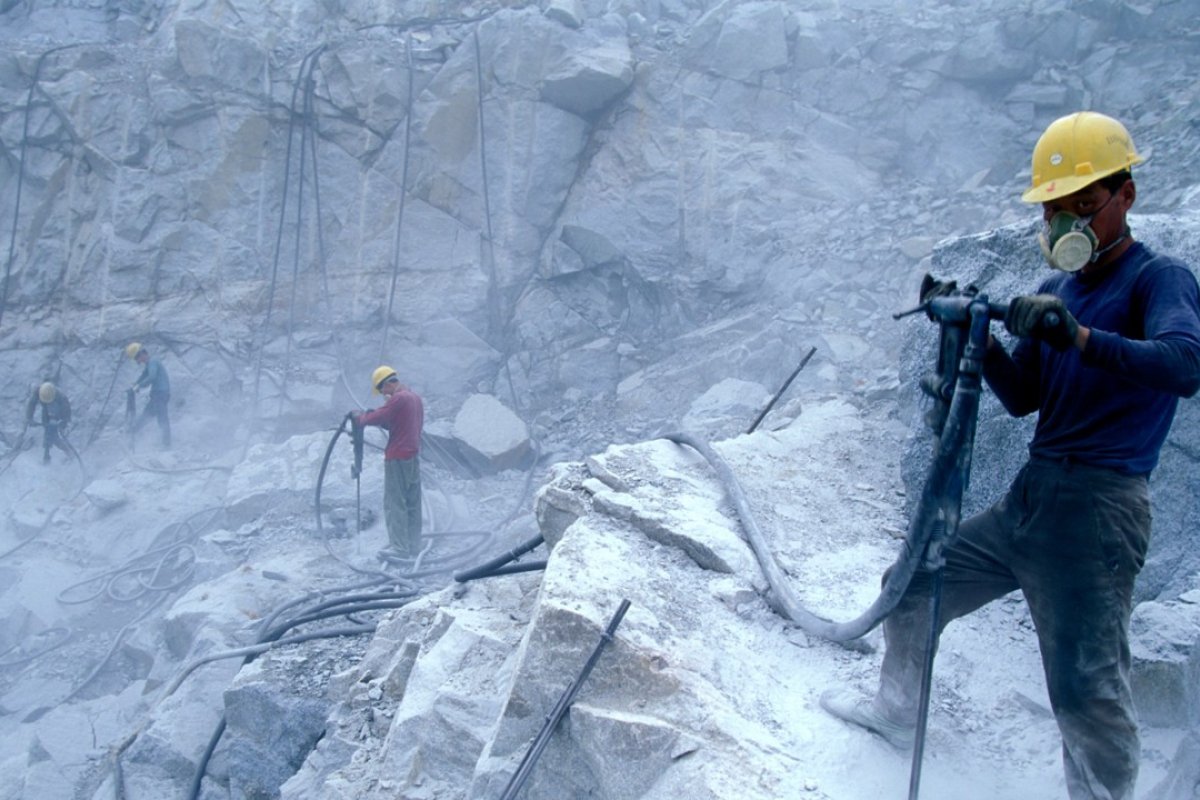 On a rainy summer day, 52-year-old Wang Zhaogang paused to catch his breath after every four or five steps. He was wrapped up against the elements, since even a common cold could be enough to kill him, and his laboured breath emitted a deep wheezing sound.

So frail that his heartbeat was visible beneath skin stretched across his rib cage, Wang, from Hunan province in central China, had lost 15kg (33lbs) over the previous year and weighed only 40kg. Still, he has travelled alone five times this year from his hometown in Sangzhi – one of the 10 poorest counties in China – to the southern city of Shenzhen to campaign for the city’s government to recognise and help workers like him.

Filled with resentment, he glared up at the city’s skyscrapers, which he had helped build from 2004 onwards – at the cost of his health. “We are treated like ants … not humans,” said Wang, gasping for air. “I sold my life to Shenzhen. If I had known the danger of pneumatic drilling, I would never have done the work, no matter how poor I am.”

Wang learned his days were numbered in May last year, when he found he has terminal stage-three silicosis – lung disease – linked to his years of exposure to silica dust on the job. Rather than quietly accept his fate, he has been petitioning the Shenzhen government for compensation.

He is among more than 600 workers from Hunan alone seeking money for medical care and to support their families – a reflection of the forgotten human cost of turning Shenzhen, in Guangdong province, from a sleepy fishing village into a city with a gross domestic product of US$338 billion in 2017.

While Shenzhen celebrates 40 years since China’s national opening-up policy that gave rise to its success, the plight of workers who built its subway lines and landmarks underscores that labour protection remains a problem a decade after China introduced a law in 2008 requiring employers to issue contracts – and thus proof of employment – to their staff.

Gu Fuxiang, a 51-year-old fellow ex-worker from Sangzhi with stage-two silicosis, said that Shenzhen could not have achieved success “without the contribution of a group of silicosis patients like us”.

“I paid with my life for contributing to Shenzhen’s achievement,” Gu said. 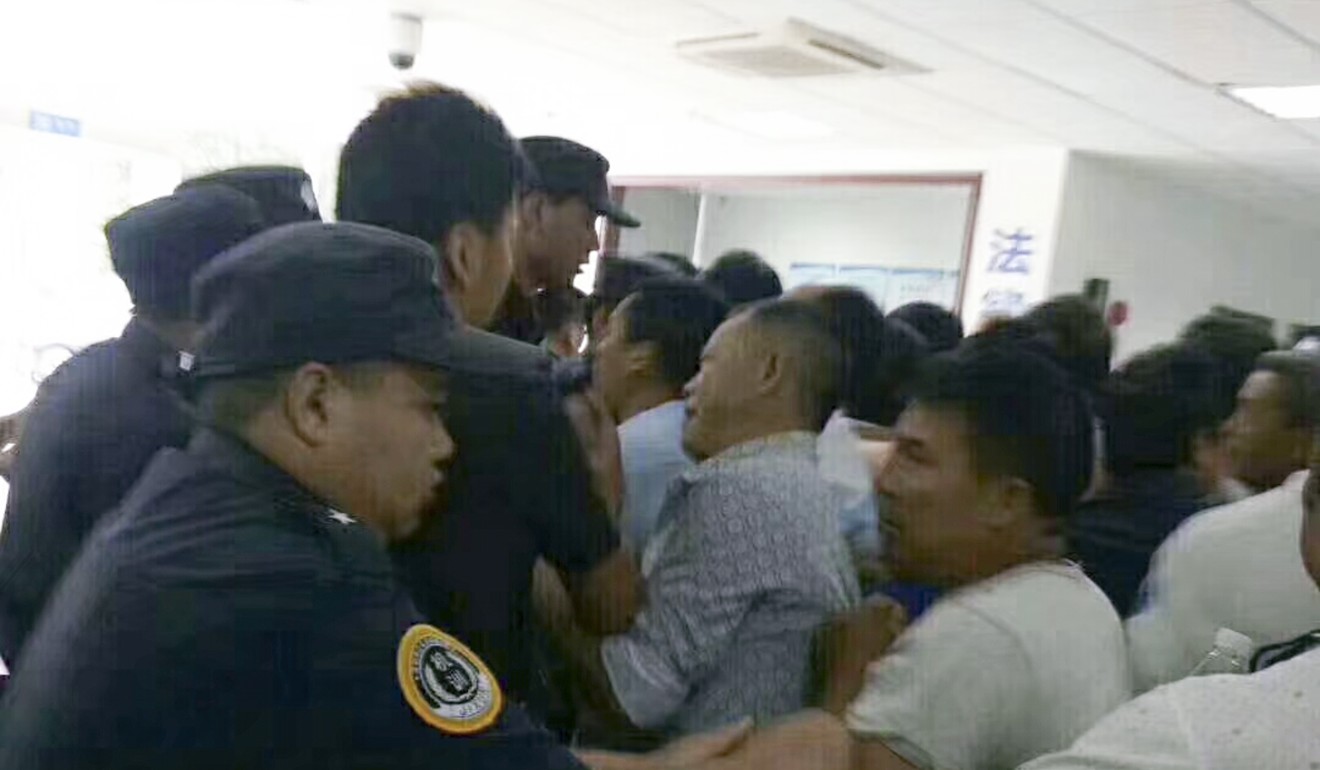 Workers petitioning for compensation after contracting silicosis in a confrontation with police.

Gu’s older brother died from silicosis in 2016 at 51, and a younger brother with suspected stage-one silicosis is awaiting an official diagnosis.

“I need this money badly,” Gu said. “I need it to support my parents, for my children’s education and to pay off debts. I don’t have much time left. I need to make arrangements for my funeral.” 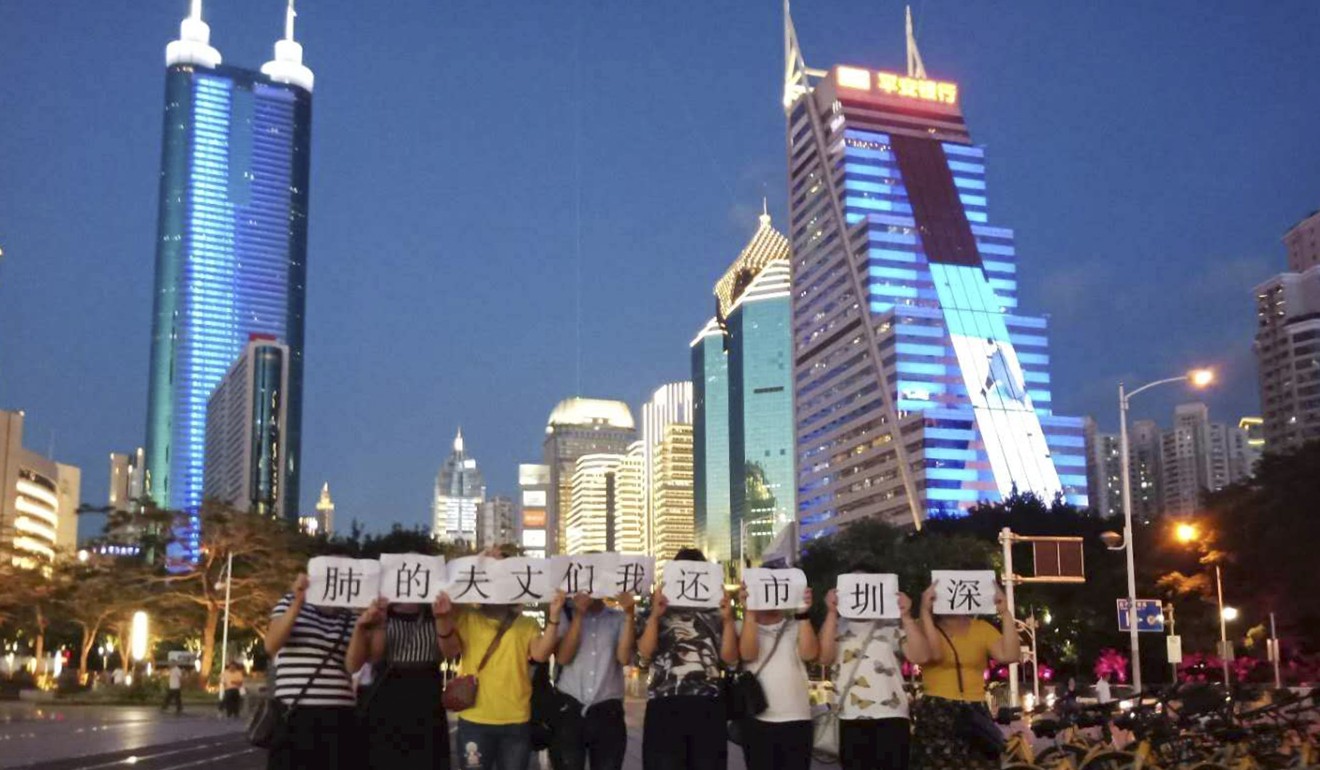 Family members of silicosis workers from Miluo City hold up a sign which reads “Shenzhen pay us back our husbands’ lungs”.

Silicosis is an incurable form of pneumoconiosis, a lung disease caused by prolonged inhalation of airborne silica dust.

Pneumatic drill operators drill holes deep into the hard granite beneath Shenzhen to prepare sites for building foundations. The Sangzhi workers said that when they were hired, such work earned a daily rate of 200 to 300 yuan (US$29 to US$44), three times higher than other types of construction work at that time.

“We would dig down to about 1.2 to 1.6 metres, find the bedrock then drill a hole to be filled with explosives [to make holes for support piles],” said Gu, adding that 400 to 500 holes were required on each construction site.

Migrant workers, who number about 287 million across China, worked most of the drilling jobs. Since the 1990s, labourers from Hunan – from Leiyang, Miluo, Zhangjiajie and Sangzhi – have flocked to cities including Shenzhen to pick up drilling work for quick cash, but in the 2000s many began falling ill and dying. 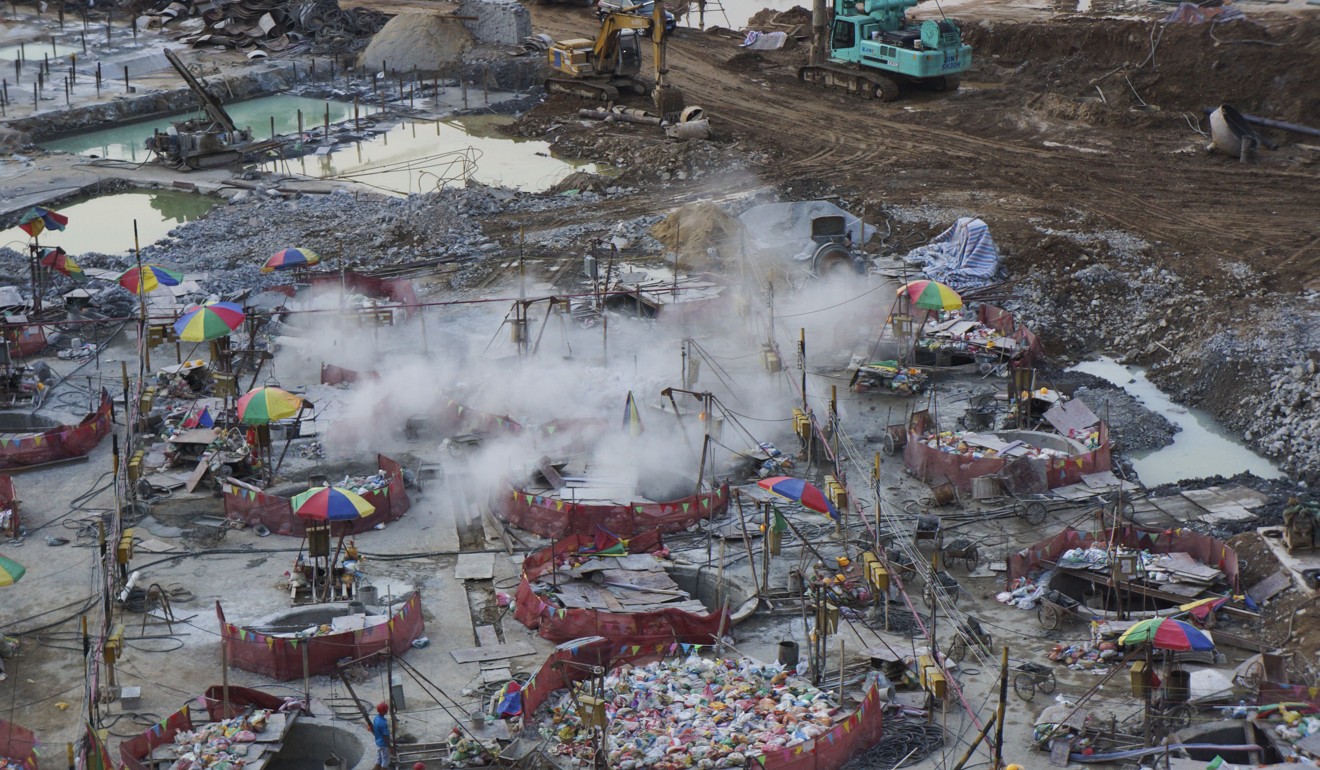 Pneumatic drilling work, one of the causes of pneumoconiosis among Chinese workers.

China’s most widespread occupational illness, pneumoconiosis, is commonly found among coal miners but is suffered in varying stages by an estimated 6 million-plus Chinese migrant workers, according to Love Save Pneumoconiosis, a Beijing-based charity dedicated to helping them.

Data from the Chinese public health ministry shows that pneumoconiosis accounted for 22,701 of the 26,756 new occupational illness cases it recorded in 2017. Silicosis alone killed 46,000 people around the world in 2013, according to the Global Burden of Disease Study by the Institute for Health Metrics and Evaluation in Seattle, Washington.

“A lot of them got ill with pneumoconiosis simply because they had been breathing in dust all day every day with no protection,” said Geoffrey Crothall, a spokesman for Hong Kong-based China Labour Bulletin, which promotes and defends workers’ rights in China.

Workers’ petitions have resulted only in small charitable handouts, partly because most workers lacked documents to prove they were employed at the sites where they worked before falling ill. 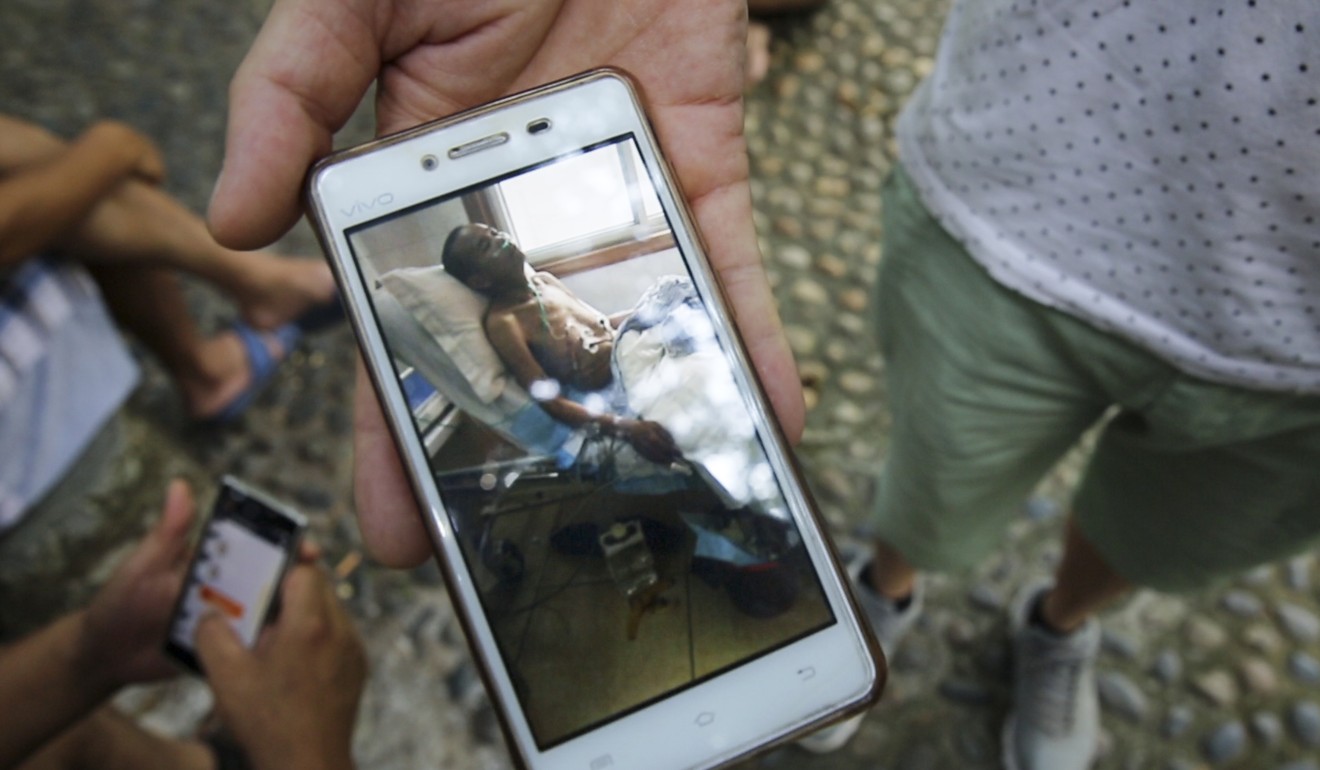 A petitioning worker shows an image of a silicosis patient in the terminal stage of his illness.

More than 200 workers made their sixth visit to Shenzhen to press their case to the city government in September, and planned another trip this month after officials failed to honour past promises to help their cause.

Minutes from their meetings, provided by workers, indicate that the authorities had pledged to accelerate processing compensation claims from 227 workers who were able to produce confirmed employment records.

The notes stated that workers were also promised mobile clinics that would be sent to Hunan to examine other workers, that Shenzhen city leaders had agreed to visit ailing workers, and that those with no proof of employment at the sites had been offered discretionary handouts from the city government. 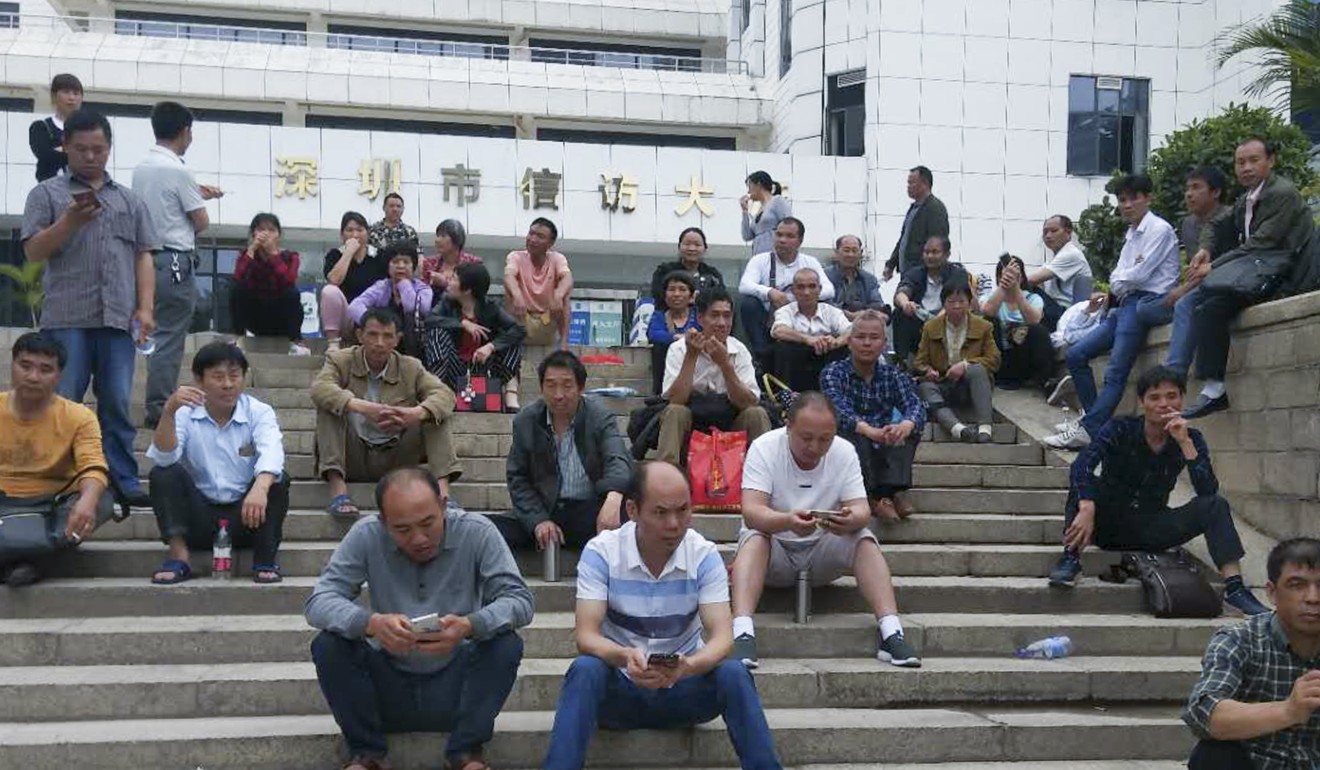 Workers gather at the Shenzhen Office of Letters and Calls.

Gu said that more cases were being identified after Hunan health authorities launched a province-wide migrant worker health screening campaign last year. The rise may also relate to the latency period of silicosis, which can take years to produce symptoms.

The number of petitioning workers from Hunan has increased to more than 600 since 2009, and additional cases have been raised by the families of deceased workers.

Professor Pun Ngai, a China labour studies expert at the University of Hong Kong, said that some workers had not joined those petitioning in 2009 because they did not realise they were sick. “But in the past two years, new cases just exploded,” Pun said. 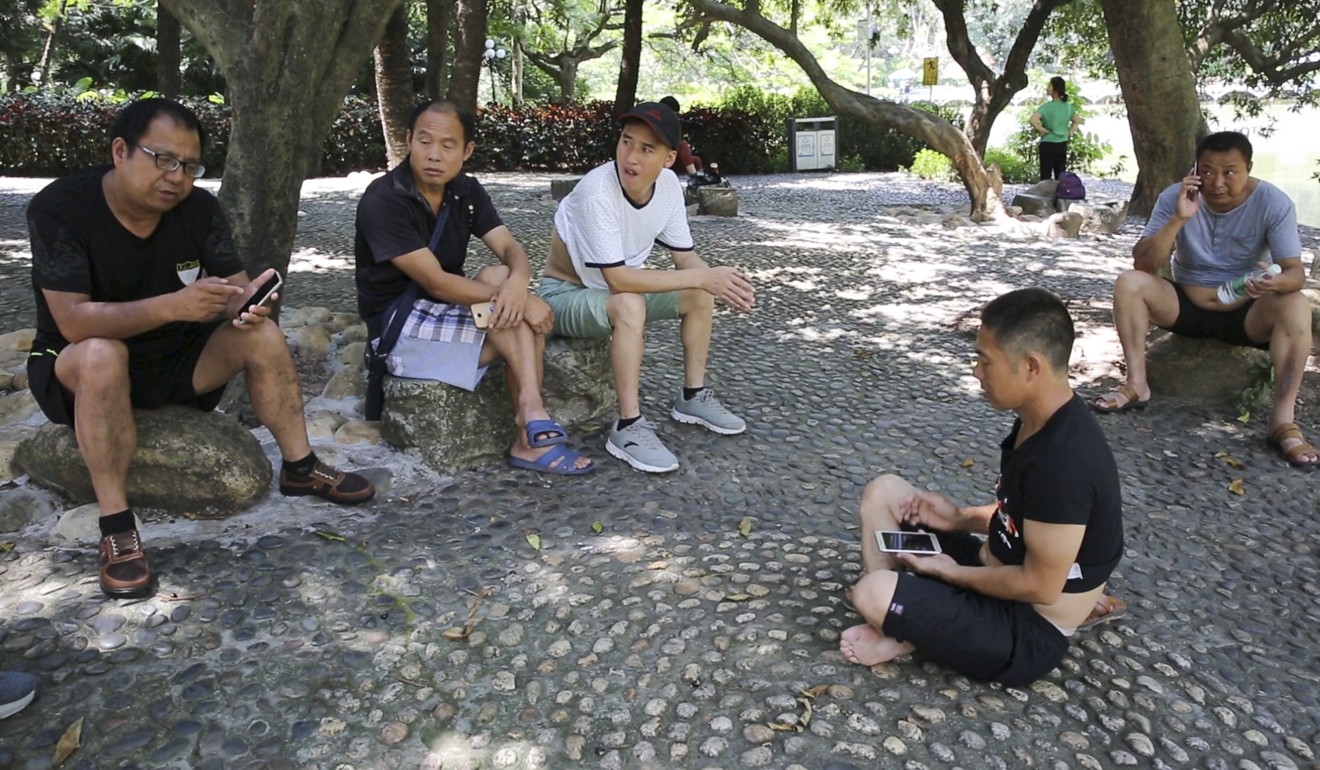 A group of silicosis patients, all former pneumatic drillers, including Gu Fuxiang (left) and Zhong Jiaquan (right) in a park in Shenzhen.

Crothall, who has been tracking the cause of the workers since 2009, said that although there were legal measures workers could take, they were time-consuming and required them first to establish that there was an employment relationship.

“A lot of these guys simply do not have any documentary evidence,” he said. “Some have work cards dating back to the 1990s, but with occupational-hazard illness you are supposed to file a claim within a year after contracting the disease.

“So the legal procedures that are available are really not much use to them … The only option is to [petition] the very rich and developed city of Shenzhen and hope the government will do the right thing.”

The number of cases is only likely to increase, according to Wang Yuehua, 50, who is another stage-three silicosis patient leading the petition efforts.

“It’s now 2018, and the dangerous jobs still exist,” Wang said. “There is no improvement. Many of the workers continue to suffer from pneumoconiosis. [The government] keeps putting us off. We can do nothing.

“But we are determined. If the petition here is not working, we want to go to Guangdong provincial government in Guangzhou. If Guangzhou doesn’t work, we may go to Beijing.” 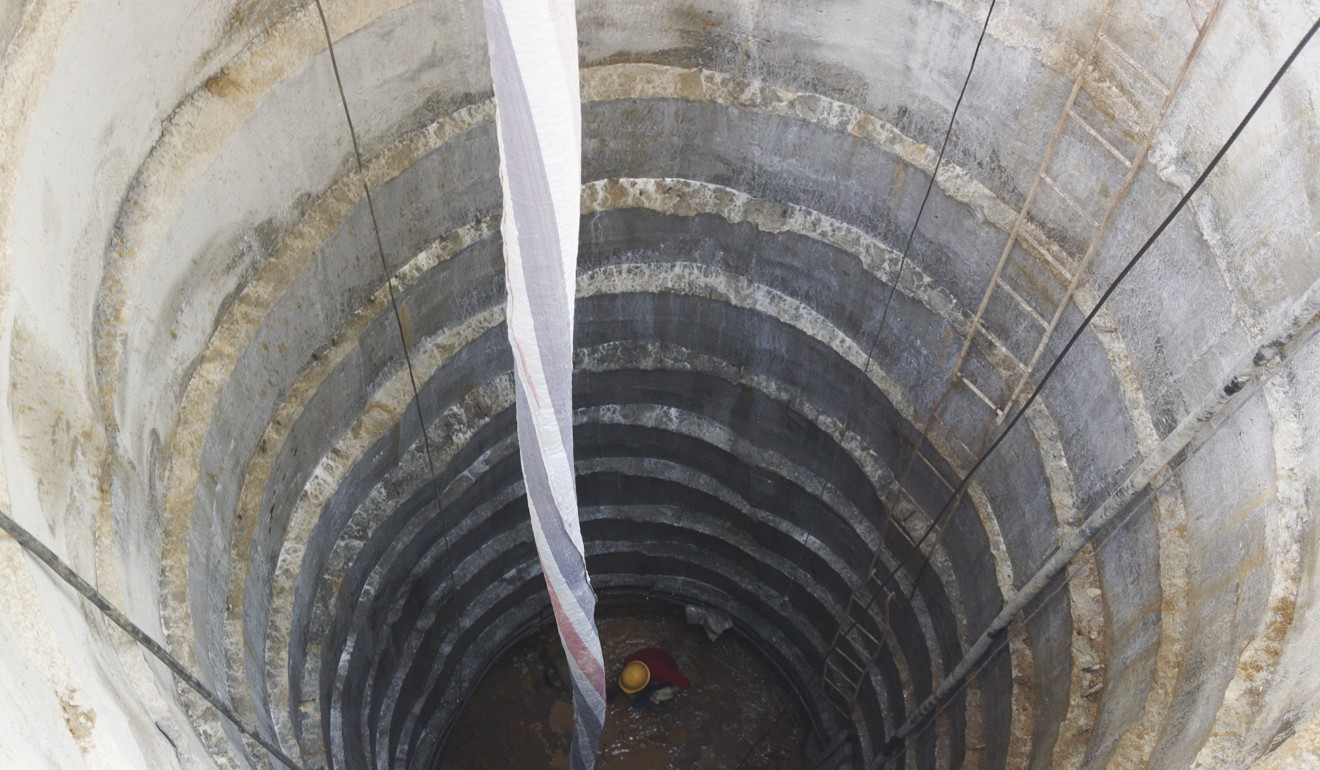 A worker cleans up the mud under a drill.

Pun blamed poor enforcement of the 2008 labour-contract law by all parties for driving ailing workers who lack employment records to the long and winding road of petitioning for an official occupational illness diagnosis.

“When something so basic as the labour-contract law is neglected, the rights of workers, particularly those in the fields of pneumatic drilling and coal mining, are just not protected at all,” Pun said.

Research in 2016 by Love Save Pneumoconiosis showed only 9.5 per cent of migrant workers with pneumoconiosis had signed labour contracts with their employers. This means most would struggle to prove they might be eligible to claim compensation for a job-related illness.

Sangzhi worker Zhong Jiaquan, a 46-year-old stage-three silicosis patient, said that occupational health clinics in Shenzhen would not even examine workers without employment records, effectively cutting off hopes of moving their cases forward. 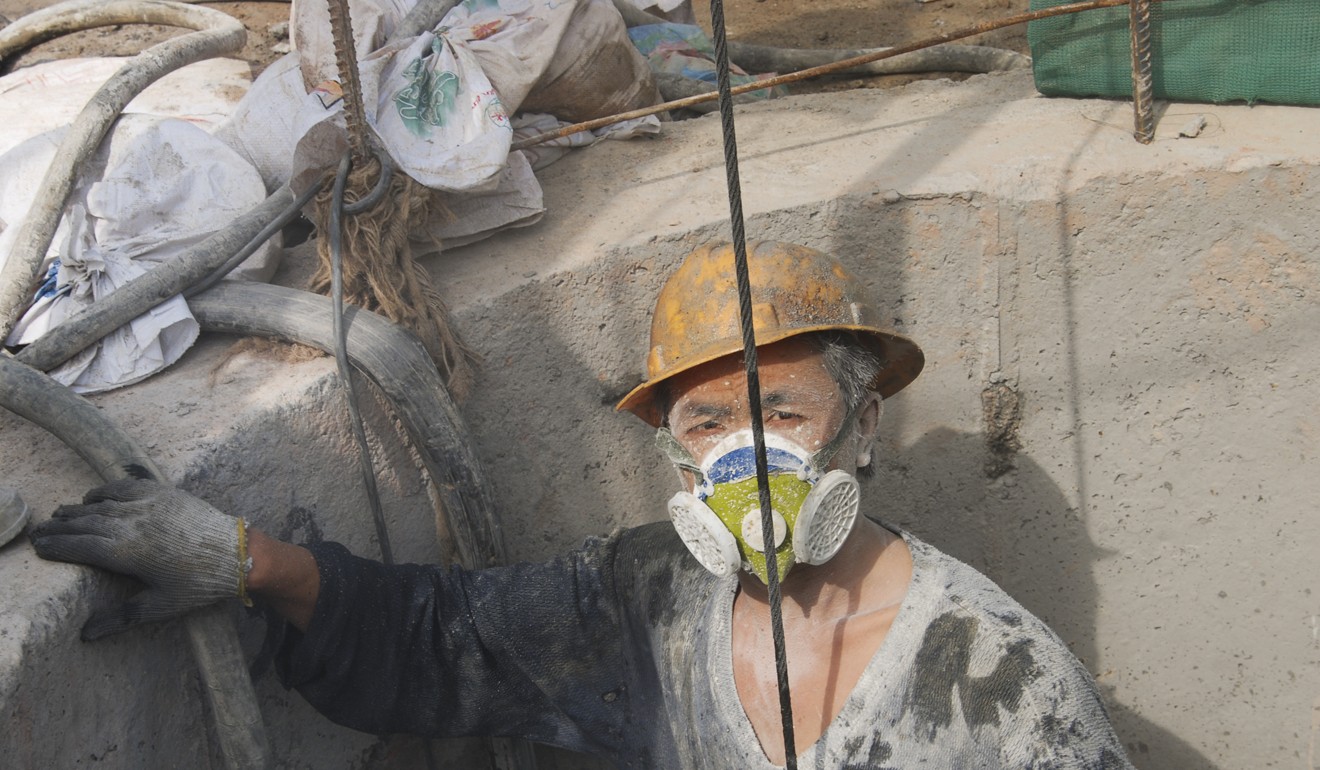 Time is another grim obstacle. Many men who used to work alongside Wang have died, and those still alive with advanced silicosis are struggling with astronomical hospital bills that are bankrupting their families.

Zhong said workers felt discarded, despite their contribution to Shenzhen’s development. “We are sick and dying; the government should at least foot our medical bills,” he said, lighting a cigarette. The risks of smoking, he shrugged, were no longer a concern as he faced a terminal disease.

“They cannot just sit there and watch us die. There is nothing more sad than to watch your brothers die a slow and painful death, leaving behind young wives and children. Soon that will be us.”

Crothall agreed that the petitions lodged were taking longer than they should to resolve, given that the Shenzhen government had decided to hear out the workers.

“It comes down to individual cases, whether they can verify who they say they are,” he said. “A lot of them will sadly die very soon.

“It’s sad to say that many [poorer] local governments are just waiting for them to die and hope the problem will be resolved that way.”