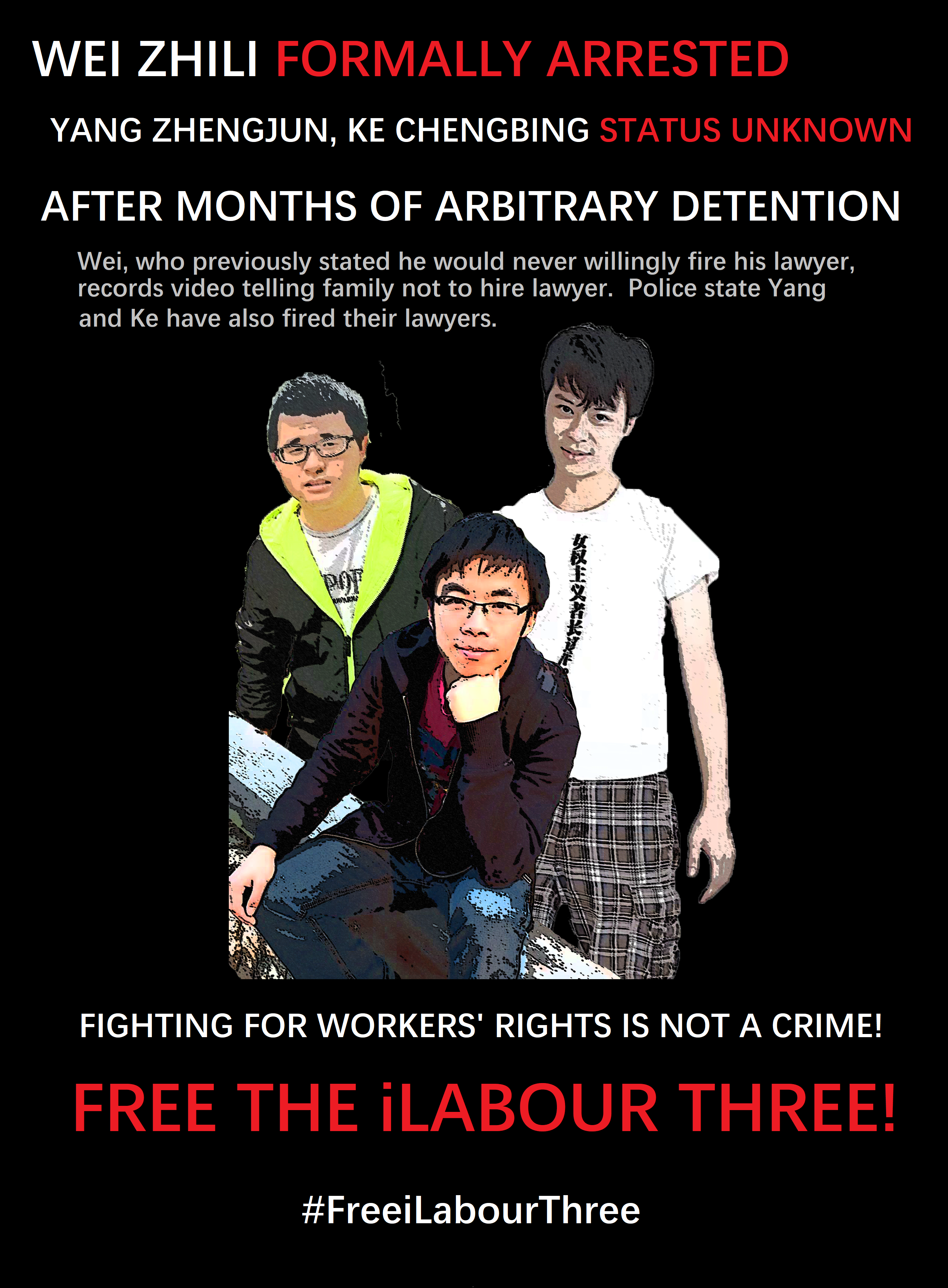 This Monday, Wei Zhili’s mother called the police to ask about her son’s conditions. She was notified that Wei’s arrest for “picking quarrels and provoking trouble” has been ratified and that a formal notice would be sent out in 24 hours. Five days later, she has still not received any formal notice.

Neither have “iLabour” co-editors Yang Zhengjun and Ke Chengbing’s families received any notice of their sons’status. For Yang, Monday was also the last day of the sixth month time limit for his Residential Surveillance in a Designated Location (RSDL), yet he has not been released, and his mother has not been notified of any change of status that would allow his detention to be legally extended.

It is suspected that all three iLabour editors have been formally arrested, thereby allowing police to keep them in custody after months of arbitrary detention.

On the day that police notified Wei’s mother of his arrest, they also showed her a video supposedly recorded by Wei the same morning. In the video, Wei tells his family “not to spend money on a lawyer.” Police also indicated a statement that they claimed Wei “willingly” wrote in which he fires his lawyer, emphasizing that Wei had rejected the lawyer his family appointed and would appoint other counsel himself.

This was not the first time that Wei’s lawyers’ requests to meet with him have been denied. During his first 30 days of detention, Wei insisted on keeping his lawyer and expressed approval of his wife, well-known feminist activist Zheng Churan’s, choice of lawyer. Yet once he was transferred from criminal detention to RSDL, a form of detention that can last up to six months without any significant evidence of guilt, and involves the suspect being detained in a location kept secret even from their families, his family-appointed lawyer has not once been able to meet with him. According to Chinese law, when a suspect in custody writes a note firing their lawyer, lawyers have the right to meet in person with their client to confirm that the note was written of their free will, yet Wei’s lawyer has not been given the chance to meet with Wei and confirm the authenticity of the note. Under such conditions, police’s claim that Wei “willingly” fired his lawyer, are doubtful.

According to police, both Yang and Ke have also “willingly” fired their lawyers, and police claim both have written notes to this effect.

In some cases, police have not only claimed that Yang, Wei and Ke personally fired their lawyers, but have also put pressure on family to fire their lawyers. In April, not long after Ke’s transfer from regular criminal detention to RSDL, his father was detained for five hours by police who came to his hometown. During the five hours, he was allowed no food or drink and was repeated told to sign a pre-written note firing the lawyer he had hired for Ke.

When Shenzhen police on the one hand practice drills to suppress workers fighting for wage arrears, while arresting those who support workers in their rights defense efforts on the other, it is clear that they intend to suppress workers’ lawful rights defense actions while cutting off social support for such workers. Their repeated refusal to allow Yang, Wei and Ke to see their lawyers and their long period of arbitrary detention are illegal and a form of heavy handed treatment intended to discourage social support for the workers’ movement.