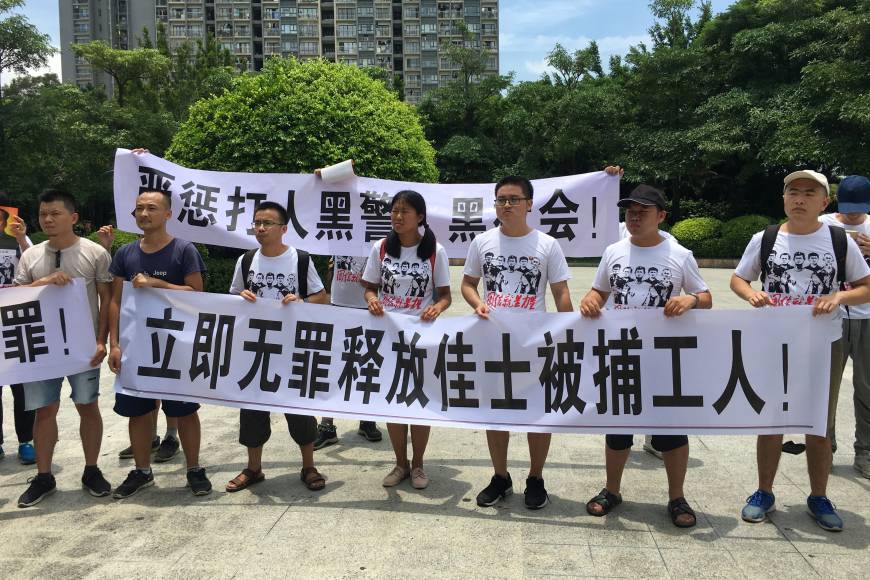 SHENZHEN, China (Reuters) - When Shen Mengyu graduated with a master’s degree from a top Chinese university in 2015, she could have landed a comfortable job in government or at one of China’s internet giants.

Instead, she went to work at a car parts factory in the southern city of Guangzhou, pursuing her interest in labor activism.

In May, she was fired for organizing workers at the plant. Undeterred, she began advocating for workers trying to form an autonomous trade union at Jasic International, a welding machinery exporter in nearby Shenzhen.

Shen is part of a cohort of activists across China who have been supporting and publicizing worker protests and detentions at a time of slowing economic growth.

The activists include students and recent graduates, as well as retired factory workers and Communist Party members.

While they appear to be small in number, the activists are drawing rare attention to calls for greater union representation from Chinese workers, particularly in the south, where demands for more pay are growing.

This unrest poses a challenge for the ruling Communist Party, which opposes independent labor action and punishes protesters. It also views the activists as a threat to its authority.

Shen told Reuters last week she believed the authorities had been intimidating her parents to get her to stop her activism.

On Saturday night, after dining with her parents near the Jasic factory, Shen was bundled into a car by three unidentified men, two student activists from Peking University who were at the scene told Reuters.

“Mengyu was shouting ‘What are you doing? Let me go, let me go’,” one of the activists said. “Everything happened so quickly, we ran to get help and by the time we came back she and the car had disappeared.”

The students said they reported the abduction to the police, who doubted their account and refused to take down crucial parts of their statement. They were also told that video cameras at the location of the incident were broken.

Calls to Shen and the police went unanswered on Monday.

Local police said on their official social media account Monday that they had been in contact with Shen’s parents.

“This is a matter regarding a family dispute, it is not a kidnapping,” it said, without further explanation. Reuters was unable to reach Shen’s parents.

WORKER PROTESTS Protests at the Jasic factory broke out in early July after seven workers attempting to form a union and elect their own leaders were laid off. On July 27, after two weeks of protests, the police detained 29 people, including laid-off workers, their families and supporters.

Hundreds of Chinese university students penned open letters on social media in support of the workers, and around 20 traveled to Shenzhen, in Guangdong province.

Unions in China have to register with the official All-China Federation of Trade Unions. Rights groups, however, say the federation is often more responsive to the demands of management than workers.

People hold banners at a demonstration in support of factory workers of Jasic Technology, outside Yanziling police station in Pingshan district, Shenzhen, Guangdong province, China August 6, 2018. REUTERS/Sue-Lin Wong On August 6, around fifty student activists and supporters of the Jasic workers protested outside the police station where the workers were detained in Shenzhen.

“Lots of fellow students say: this incident is about workers, what does this have to do with students? I’ll tell them one thing: today’s students are tomorrow’s workers,” said Yue Xin, 22, a recent graduate of Peking University, in a video from the protest she shared online.

Yue, currently a factory worker in southern China, gained prominence in April for pressing her university to make public an investigation into a decades-old rape and suicide case.

The people who traveled to Shenzhen have been facing pressure from their universities, parents and officials, according to nine activists interviewed by Reuters.

“My university advisor has called me repeatedly, accusing me of being involved in illegal activities, “ said one activist from a Guangdong university. The activist said he had been told “to think very carefully about what I was doing and how it might impact my studies and my future.”

Some supporters were intercepted on their way to Shenzhen and sent home, the students said.

In interviews, some activists said they were motivated by growing inequality in China, and heard about worker protests in online forums before posts were removed by authorities.

They said they were also exposed to labor issues at student-run university clubs and reading groups.

“Both my parents are factory workers so I have always had an interest in labor rights,” said one of the activists who saw Shen taken away.

The students often speak the same language of Marxist theory and egalitarianism used by the Communist Party, yet have found themselves at odds with the authorities.

Last November, a Peking University graduate, Zhang Yunfan, was detained in Guangzhou after founding a reading group focused on improving the plight of factory workers.

In an online statement on July 29, Jasic denied mistreating workers or blocking their union. It said it fired some workers in accordance with the law and that a union was being established. Jasic did not respond to a faxed request for further comment.

Shenzhen police said a group of former Jasic workers who illegally entered the factory were being held for investigation. The Shenzhen ministry of public security and the detention center where the workers are being held did not respond to faxed requests for comment.

ACTIVISTS HARASSED The authorities have been keeping close tabs on the factory workers, students and other supporters, according to interviews and eyewitness accounts.

The students - who are renting accommodation near the Jasic factory – say they have had to move three times, as police pressure landlords to evict them.

People who appeared to be plain clothes police were keeping a close eye on the building where the activists were staying during a recent visit by Reuters.

The activists said police had also set up a fake factory recruitment stand outside the building and infiltrated into the group a mole posing as a former factory worker. The activists’ claims could not be verified by Reuters.

The factory workers and their supporters communicated with Reuters through multiple phone numbers and WeChat accounts that were continuously shut down.

China does not publish official statistics on numbers of worker protests and strikes.

Former workers at Jasic, which employs more than 1,000 people, say conditions in the company’s factory are dire.

“Sometimes we would work for one month straight without any time off,” said Huang Lanfeng, 25, a former Jasic employee who was detained for protesting. “They wouldn’t let us freely quit and they even watched us go to the toilet.”

She added: “I’ve worked at a lot of factories and none were as bad as Jasic.”

Geoffrey Crothall, communications director at the Kong Kong-based China Labour Bulletin, said the protests could resonate at other factories.

“It certainly has the potential to be replicated if the workers from another factory are similarly motivated and well organized,” he said.

The Communist Party has pushed for unions to better protect workers, but the efforts were “superficial”, he said.

“It really does impinge on the party’s legitimacy.”

As of Sunday, 15 of the detained workers and supporters had been freed. Four detainees told Reuters they were treated harshly in detention, with police threatening them with death and saying they would not be released unless they confessed.

The workers’ accounts jibe with stories from detained advocates in other incidents and follow an established pattern of Chinese police interrogation, according to Patrick Poon, a Hong Kong-based researcher at Amnesty International.

The detentions have become an even greater rallying cry for the activists.

“What started out as a labor dispute turned into unfair dismissals and police abuse which has galvanized supporters from both around the country and around the world,” Shen told Reuters on August 6, before she was taken away in the car.

Reporting by Sue-Lin Wong in SHENZHEN and Christian Shepherd in BEIJING; Additional reporting by the Shenzhen newsroom; Editing by Philip McClellan