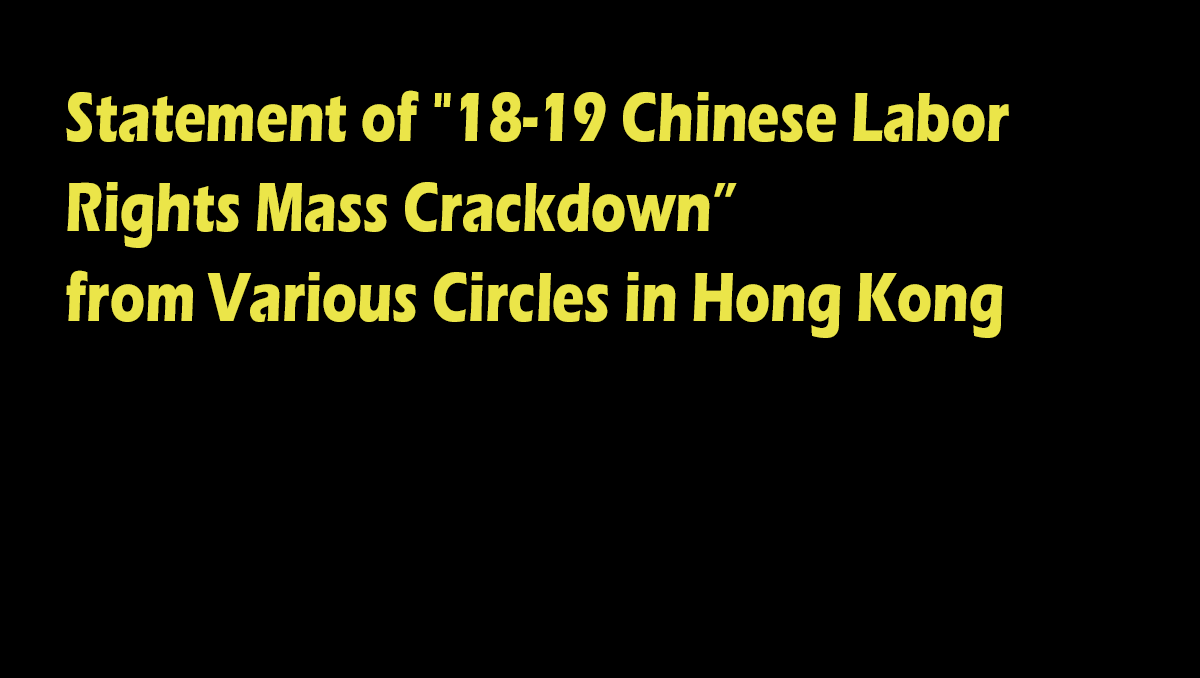 We are a group of Hong Kong groups from labour rights, social work, religious, media and human rights circles. Since July 2018, the labor rights movement in mainland China has once again ushered in a series of harsh suppression and mass arrest. The scope of the crackdown has spread throughout the country. The number of people affected has exceeded 130, and dozens of them have been detained until now in an unknown location. We have been observing the incident with deep worry and anger.

The new wave of labor right crackdown began with the Shenzhen Jasic incident last year. A group of factory workers working in Shenzhen Jasic Technology Co., Ltd. were trying to unionize due to the poor working condition and management of the factory. Although the procedures of the establishment of the trade union was legally carried out in accordance with the Trade Union Law, the workers involved were repeatedly suppressed and fired by the employers and the district labor union. This had triggered large-scale solidarity actions online and offline from university students nationwide. in August, a large number of factory workers, solidarity students, NGO workers and even official trade union workers were arrested in the incident. The arrest and suppression had even spread to students groups in Beijing, Nanjing and other cities. In January of this year, Wu Guijun, Zhang Zhiru and three other experienced labor rights activists were arrested in Guangzhou and Shenzhen respectively under the charge of “Gather Crowd to Disturb the Social Order.” In January and March, the crackdown was extended to the online labor right media. Three editors of the “iLabour” who continued to follow to the struggle of silicosis workers from Hunan’s were arrested for “Picking Quarrels and Provoking Troubles”.

By today, including those arrested from August to November last year, a total of 22 NGOs or social work center members serving the grassroots working class in mainland China have been arrested and 10 institutions have been affected. Among them, Fu Changguo, a staff of “Shenzhen Dagongzhe Migrant Workers” has been detained in various forms for a whole year and been unable to contact lawyers and family members. His centre were forced to stop operating. In Guangdong Province alone, the “Qingying Youth Social Work Center”, “Xin Gong Yi” and “Shenzhen Chunfeng Labor Dispute Center” were all affected during the one-year search. Five social workers in “Shenzhen Qinghu Community School”, “Guangdong Mumian Social Work Service Center”, and “Beijing Lengquan Hope Community” were also detained in the “Residential Surveillance at a Designated Location” (RSDL). Their institutions were suppressed and forced to dissolve. A number of projects assisting migrant workers were also forced to terminate. At the same time, harassment and suppression of labor rights groups across the country continued. Staff of various centres were called for questions and even arrested. Daily operation of the organizations was closely monitored.

China’s economic development is currently facing a downturn. The Sino-US trade war has been affecting the manufacturing and profit margin of many companies have been slimming. Workers’ well-being are usually scracified. Many workers were ordered to take unpaid leave and even dismissed. At this difficult time, labor rights organizations and workers centre in communities are urgently needed to offer help to workers. What the Chinese government should do is to assist these organizations instead of suppressing them. What even worrying is that most of the arrestees are detained under “Residential Surveillance at a Designated Location” (RSDL). Through RSDL, police can detain the arrestees at designated places outside the regular detention centre and do not need to disclose the places of detention to the family. The person under RSDL is not only deprived of the legal right to meet their lawyers or family members, but also frequently forced to take confession videos. We worry that the arrestees might have been tortured physically or mentally to make confession.

In this month, we will launch a series of events on the first anniversary of the arrest of different arrested laborers as well as their expiration of the six-month “Residential Surveillance at a Designated Location” (RSDL). We will also take actions on the International Day of the Victims of Enforced Disappearances. The updated information of the victims of “18-19 Chinese Labor Rights Mass Crackdown” will be disclosed regularly.

Here, we demand the Chinese government to,

This statement is launched by following organizations: