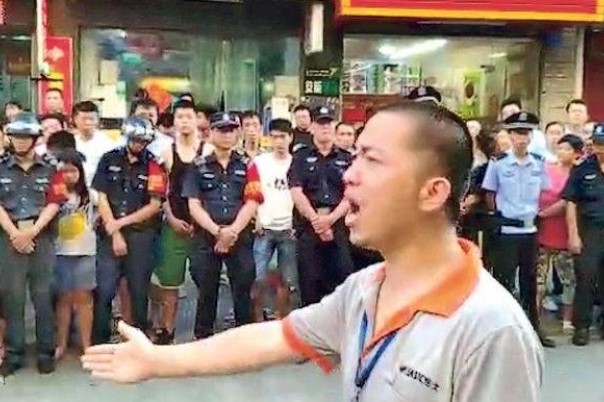 Liu Penghua, along with Mi Jiuping, was one of the three workers who took the lead in trying to form a union at the Jasic welding equipment factory in Shenzhen, China. Liu was the first to face retribution for his actions, suffering a beating by factory thugs on July 16. He is now among the four worker activists being tried for participation in the Jasic organizing.

Liu Penghua was born in a poor mountain village in Baishui Prefecture, Shanxi Province. His village is a water-scarce place, where people use water sparingly and with care, and bathing is a luxury. In this village where few people had much of a chance at changing their fates, Penghua was one of the lucky ones. He tested into a vocational normal college in the city, the kind of opportunity that many fellow villagers saw as a way out of their impoverished lives. On the day Penghua left for college, his fellow villagers each brought out a pail of their most precious resource—water—to congratulate him, and to let him bathe, before heading on his way for college.

Penghua liked to say that his childhood taught him that material circumstances don’t beat poor people down, because more than anyone else poor folks understand the importance of helping one another. He took that lesson with him when he later went out to join the flood of China’s migrant workers.

But rather than heading straight out to the city after graduation, Penghua’s first choice after coming out of school was to work as a math teacher in the countryside. After graduating from normal school, he wanted to use his education to give back to the place of his upbringing. Yet after a period of teaching elementary school in the countryside, the poor circumstances and the low wages of rural school teachers pushed him to leave home, and—despite his education and aspirations—join the masses of migrant laborers who had left these poor rural areas to strive for a better future. Growing up poor, and teaching children who would grow up in the same circumstances, Penghua learned early on about inequality as well as about the resilience of the poor.

The Uses of a Union

When Liu Penghua arrived at Jasic, it was not the first time he had been in a fight with his bosses. Penghua’s sense of justice and solidarity with others made him a fighter, and at an earlier job he had already led a relatively successful fight for proper overtime compensation and housing providence fund payments (which help workers with housing expenses). But it was precisely this earlier struggle that taught Penghua that fighting to defend workers’ rights according to the minimum standards of the law is not enough and that made Penghua aware of the important role a union could serve.

Unlike during the now famous struggle at Jasic, at that earlier time Penghua and his co-workers only knew that they were being cheated and needed to defend their rights. They knew their overtime payments and their housing providence fund payments were illegally low, cheating workers of 500-600 yuan ($72-$86) per month, and fought back directly against this illegal behavior by paying a visit to the Labor Department to complain and seek mediation. After unbending pressure from the workers, the factory agreed to legalize its overtime and housing providence fund payments, and paid workers back their overdue overtime wages.

Yet although the fight was victorious, Penghua and other leaders of the struggle were fired shortly after their victory. Cementing Penghua’s dismay, right after his dismissal, a friend of his still at the factory had his hand caught in a press and suffered a bloody work injury. The factory promptly tried to fire this friend and evade their legal responsibility for compensation. Though the workers had won one fight, they had been kicked out, and the fight against the factory’s illegal practices and exploitation of workers was far from over.

While the fired worker leaders could continue to fight for severance compensation, Penghua realized that the wanton punishment of worker leaders made any temporary victory vulnerable. What would remaining workers do after all those who dared to fight were fired?

It seems it was this struggle that planted in Penghua the idea that workers needed something more long-lasting to protect their rights—not just scattered rights defense struggles. Perhaps a union.

Penghua started working at Jasic in October of 2016. Though Jasic is a well-known factory in the area, to Penghua it seemed the factory was no better and in some respects worse than the many other sweatshops he had worked in. The first thing that raised Penghua’s ire was the fine system. Oftentimes without knowing what they had done wrong, workers would find out they had violated some line of the “Jasic 18 Bans” and get slapped with fines of 200-300 yuan ($29-$43). The fines added up and took a toll on worker’s wages. On top of this, they violated labor law.

The mandatory company hike was another company practice that frustrated most workers. Even workers coming off the night shift were not allowed to skip it. Supposedly an event to build company culture, the hike was a regular annoyance to workers at Jasic.

Yet Penghua knew that to simply fight against these illegal and unreasonable company practices would likely lead to being picked on, slandered, or fired by the factory. He saw it happen with Yu Juncong, the worker who spoke out against the company hikes.

Penghua was aware of the concept of trade unions. He knew that a union was supposed to be controlled by workers and act as a collective and legally protected way for workers to fight for their interests. If at the former factory that had fired him, they had had a union, even when worker leaders like him were fired workers would know where to go for support.

On May 10, when Penghua along with co-workers Mi Jiuping and Zhang Baoxin went to the Pingshan District Federation of Trade Unions (FTU) and Pingshan Human Resources Department, the 28-signature petition they brought with them included not only complaints about illegal fines, and the beating, swearing at, and threatening of workers, but also included the request to form a union. This request was approved by the Pingshan District FTU.

Quest to Form a Union

After their request to form a union was approved, Penghua and Mi Jiuping submitted an official request to form a union to the local FTU, only to be told that they needed the stamp of the company in order for their request to be approved. Following the District FTU’s instructions, they returned to the factory with their request letter to ask for the company’s stamp of approval. They were met with rejection. When they contacted the District FTU asking what to do, they were told to first recruit 100 members and hold a membership general assembly to select a union preparation committee. At the time, workers were working overtime until 9:30 every evening. Mi and Liu were left with no choice but to use evening hours, staying busy until nearly midnight for two days in a row, door-knocking one dorm room after the other to collect signatures. In that short time, they collected 89 signatures. It was only company interference on the third day, slandering Mi and Liu and beginning to threaten those who signed, that prevented them from collecting more.

What Mi and Liu hadn’t expected was that the District FTU would swiftly flip on them and go from being supportive to denying their involvement in the union formation effort. The first sign of the FTU’s about-face came when the company threatened to fire Mi if he wouldn’t move to a different work post. When Mi complained to the FTU about such treatment, he was told the FTU had already opened up channels of communication with the company and that he was not to contact the union any more about such problems. Later when Mi released an open letter trying to clarify the truth amidst all kinds of slander and was called in by the company for doing so, District FTU Vice Chair Huang Jianxun was present and watched silently as company executives berated Mi, then told Mi that his union formation activities—performed according to FTU instructions—were illegal.

With the turn in the District FTU’s position, retribution against Mi and Liu ramped up. While Mi Jiuping had earlier resisted the company’s efforts to reassign him to a different work post, Penghua was the first to fall prey to the company’s schemes. Penghua had been assigned to a temporary work posting in an isolated corner of the factory. It was here, on July 16, that he was suddenly approached and beaten by two mysterious men. These men were escorted out of the factory in a vehicle. After Penghua reported the incident to the police, he ended up being taken to the police station and held overnight while those who had beaten him escaped without harm. Penghua quickly publicized his beating over social media, only to learn the next day that Mi Jiuping had met with similar treatment and had been forcibly fired and removed from the factory.

On July 27, Penghua joined with other workers to attempt to re-enter Jasic and fight for his and other workers’ rights. He was arrested along with 28 other workers and one student supporter. Penghua is now being held in the Shenzhen No. 2 Detention Center, along with three other Jasic worker activists, awaiting trial. He has been repeatedly denied the right to see his lawyer.